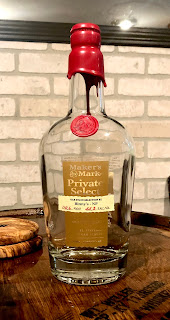 VITALS:
- $70
- 110.6 Proof
- NAS
- Staves: 4 Seared French Cuvee; 2 Maker's 46; 3 Roasted French Mocha; 1 Toasted French Spice
- Kentucky
The last couple times that Binny's has selected barrels from the Maker's Mark Private Select program, they've had employees go along for the tasting and to make their own stave selection to be bottled. I previously reviewed one picked by the former spirits manager at my local Binny's (he's since moved to another location).
So, when another friend of mine, who is also a Binny's employee, got to slap his initials on the label of one of these Private Selects, I was more than obliged to grab one. Mr. NP has become one of my favorite drinking buddies, as I've found that our palates seem to line up pretty closely. In fact, as I'm sitting here writing this, I'm struggling to think of anything he's recommended that I've disliked. He's even turned me on to Armagnac.  So, take this review for what it is -- a review of a whiskey selected by a good friend that I know going in I'm probably going to like. There's bias across the board here!
On the nose I got a peppery caramel--a bit different from salted caramel but just as good. It had a nice mix of sweet and spicy. It also had notes of creamy vanilla and even a sweet grain-forward note, like graham cracker. I also got a light pickle note from time to time, which I can't say I've ever gotten from a Maker's Mark bottle before.
The flavor was all toffee forward. It was kind of that creamy caramel but with an added richness and depth. It was very sweet up front, but not cloyingly so. It had a light pastry note to it that was somewhat hard to place my finger on, but it was like a not-as-sweet honey bun.
While the toffee and caramel notes dominated up front, they gave way to other flavors, most notable of which was a distinct chocolate flavor. I'm not a big dark chocolate fan, but here it worked really well to temper the sweet caramel notes. This was like a dessert whiskey, but the kind of dessert you might get at a nicer restaurant where the dessert is rich and delectable and a play on flavors, as opposed to some sugary treat in a bowl--the kind of restaurant you don't take your kids to.
I think what I liked most about this whiskey, though, was the finish. It had a nice, viscous texture that coated the mouth and the back of the throat, allowing for these flavors of toffee and dark chocolate to linger for an incredibly long time. This is also where the black pepper spice that I was getting on the nose finally made its appearance. If there was anything at all lacking on the front end of the palate it was a bit of spice, and it showed up on the finish in a way that seemed to perfectly balance everything out.
Again, take this review for what it is. Perhaps I'm a shill, but I think Mr. NP did a fantastic job with this pick and his combination of staves. When it first hit the shelves, I tried some from a friend's bottle and loved it then. I was afraid that when I finally got around to opening my bottle, months later, it wouldn't be the same experience. But that was not the case, and this was a bottle that I absolutely flew through once opened.
Grade: A
Posted by Brian Zeeck at 2:56 PM