With a gimmicky name like Jesse James, and the fact that it resided on the bottom shelf at a low price point, I really didn't expect a whole lot from this bourbon. That's not to mention that it's only a three year old bourbon (though, kudos to Jesse James for at least having an age statement!).

The nose is almost all molasses. It smells like a very sweet bourbon, with some hints of leather to bring that sweetness back to earth just a little bit. The nose, sweet as it was, was weak in general. At only 80 proof, I guess I couldn't expect a whole lot, but I really had to work to discern anything from this nose.

The bourbon is watery and thin, with legs as long as Cotton Hill's. This is a characteristic that is common among lower shelf bourbons, and this was not unexpected.

The flavor is not strong either. My overall impression is that this is unimpressive and weak, from nose to finish. Up front, though, what flavor is there is good. I got a nice blend of vanilla with a sweet peanut flavor to it. Interestingly, I got a light wood tone underscoring everything else, as though this bourbon were older than it actually is.

It's a thin and watery bourbon, and for that reason alone I'd prefer this as a mixer as opposed to a sipper. On its own it was simple and thin, and on the finish it had a very weird, astringent aftertaste. I've heard people describe their bourbon as tasting like band-aids, and this is the first time that I've ever gotten that from a bourbon. The finish was, quite simply, bad. A bourbon with a great finish makes me want to go right back to the bottle for another pour. This one just had me looking for something else.

I even tried it as a mixer with some ginger ale, and I just couldn't find a way to enjoy it. Even as a bottom shelf bourbon, this one falls well short of being a decent bourbon.

Grade: D
Posted by Brian Zeeck at 6:13 PM No comments:

This is the fifth recipe that I've managed to get my hands on, putting me right at the halfway point. Many thanks to Binny's consistent efforts to make these private selections! I don't know how difficult it will be to find the last two when I get to that point, but I am certainly looking forward to that chase.

In the meantime, I couldn't wait to pop this one open as it had been a bit since my last. The nose is a distinct leathery scent. mixed with vanilla and baking spices, kind of an allspice or cloves scent. This combo made for a great nose, and that tangy spice was certainly a hint of what was to come.

The first thing that really struck me with this bourbon was its incredibly oily texture. I've never had a bourbon that coated the mouth as much as this one does. This is an incredibly full bodied bourbon with some long, sturdy legs on it!

The initial sip gave of lots of almond and vanilla, but it also had a certain tang to it, kind of like amaretto liqeur. I couldn't quite place that tang, but it was almost a brandy-esque flavor, with light fruit notes to underscore the almond and vanilla.

It also gives off towards the end a decent burnt sugar flavor, which, after swallowing, transformed to a nice caramel flavor that would just sit at the back of my throat and hang out there for a while. The combination of everything results in a sweet nutty-ness, kind of like toffee coated peanuts, but with an interesting twist.

After the bottle had been open for a few weeks, the sweet almond flavor seemed to really take front and center, and it was underscored by a light licorice note, perhaps what was previously the tangy allspice/brandy note.

This is a very complex, very bold and very rich bourbon. It had a lot of flavors going on, but they all seemed to come together to make for a delicious and interesting pour. It's been a while since I've been truly disappointed to have finished the last drop of a bottle, but such was the case with this one.

Grade: A
Posted by Brian Zeeck at 5:30 PM No comments:

As the name would imply, John J. Bowman Bourbon hails from Virginia. While it's not the bourbon Mecca, considering the deluge of quality bourbons hailing from outside of Kentucky, that fact alone should not steer anyone away from this bourbon. I've always been intrigued by it, and have read review after review that this is a good to great bourbon. Though I've wanted to give it a try, it seemed to have become more scarce than it previously was for a while, and I just couldn't find it. However, on a recent mini-road trip for work I found a bottle at one of my go to stops whenever I'm out that way, and I didn't hesitate to pull it off the shelf.

To get right to the point, these other positive reviews were absolutely correct. This is definitely a very good bourbon, one I wish I had gotten around to earlier, and one which I will happily enjoy whenever given the opportunity to do so. It is going into my memory bank of solid bourbons that could be mainstays for me, right there with Eagle Rare, Four Roses Single Barrel, Old Scout, and others.

The nose is almost all caramel. Sure, there are hints of vanilla and the expected light burn from the alcohol, but the caramel clearly dominates on the nose on this one.

The taste was somewhat different than what I was expecting after smelling it, but it actually exceeded my expectations. My first notion was that I am a fan. Consistent with the nose it carries a heavy caramel flavor. Now certainly all bourbons should have those vanilla and caramel notes, but to the extent there's any sliding scale of vanilla versus caramel flavors in bourbons, this is all the way on the caramel end.

It has a rich coffee undertone that really adds to the character, complemented by a light cinnamon spice at the end. It really is like a caramel flavored coffee drink with cinnamon sprinkled in, and as someone who likes his coffee to be foo-foo'ed up, this really appealed to me.

It had a light burn that tended to evaporate pretty quickly, and by the last few pours from the bottle was pretty much nonexistent. It also has a hint of oak dryness to it. Although there's no age stated on the bottle, that certainly gives the indication that A. Smith Bowman Distillery is not simply throwing some young juice into a bottle to hurry up and get it out on retail shelves. It's got the taste of an 8-10 year bourbon (other blogs suggest that it's a 10 year old bourbon). That oak from the age seemed to be just the right amount, adding to the character of the bourbon rather than making it bitter or otherwise detracting from the traditional bourbon notes as is the case with some longer-aged bourbons. 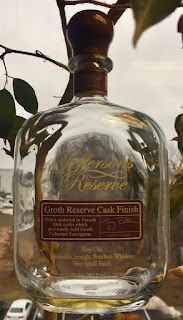 Jefferson's Reserve Groth Reserve Cask Finish has been staring me in the face from it's spot on the liquor store shelf for quite some time, intriguing me, but not enough for me to pony up the $70 to buy it. However, I stumbled upon a couple of very positive reviews online, and I decided to give it a try. Specifically, others had commented that for people that like wine barrel finished bourbons, of which I consider myself one, this is one of the better ones out there.

The nose is soft and inoffensive, a nice blend of vanilla and dark fruits, kind of a blend of black cherry and raspberry. The wine influence is noticeable immediately upon popping the cork. Interestingly, the longer the bottle was open the stronger the wine scent became.

The palate, much like the nose, is soft and velvety smooth. Sweet tobacco mixes nicely with hints of plum and blackberry. On the back end lightly spiced vanilla notes come in. The wine influence is significant but not overwhelming. Unlike the port finished bourbons like Angel's Envy, the wine influence here isn't sweet, but more of a savory wine flavor.

That wine balances nicely with the traditional caramel and vanilla notes of the bourbon. Those more traditional notes don't really come through, though, until the finish. That's where this bourbon really seemed to sweeten up, leaving a nice caramel coating on my throat and a vanilla undertone that just never really seemed to go away.

This bourbon has a nice viscosity to it, really feeling substantial in my mouth. Yet, the lower proof mixed with the wine finish makes for a very easy drinker, one that anyone from the novice to the experienced bourbon drinker can appreciate. Also, for what it's worth, it goes really well with good milk chocolate!

Featherbone Bourbon hails from Journeyman Distillery, out of Three Oaks, Michigan. I see the Journeyman Distillery lineup pretty regularly on shelves around the Chicago area, but I'm not sure to what extent they have more than a regional reach. In any event, aside from a couple collaboration whiskeys, I had never tried anything from Journeyman, so I decided to finally give their bourbon a shot.

Coming from a relatively young craft distillery, I fully expected this to be a young and undeveloped bourbon. No age is stated on the bottle, and it's not advertised as a "straight" bourbon, which tells me it's likely younger than two years. Interestingly, though, it is advertised as "handmade" and "organic." Not that either of these characteristics were a selling point for me, but interesting to note.

The nose on this bourbon is very good. It's got all sorts of deliciousness going on, with the delicious scent of butterscotch candy blending nicely with sweet pipe tobacco. This is one that could be turned into a candle scent, as I could just sit there sniffing it all day.

Unfortunately, however, the nose was really the best part of this bourbon. As I have noted in many young craft bourbons, there is a distinct sour, rotten apple flavor that makes me pucker and even cringe a little with each sip. It's hard to describe exactly, but it reminds me of the flavor I get when I've bitten into an apple that has been sitting out too long and is well past it's peak ripeness. It's a flavor that is impossible to enjoy and difficult to get past.

While I didn't find that flavor as offensive as I have found it in other young craft bourbons, it nonetheless dominated the taste buds from start to finish. Other flavors were able to sneak their way through onto my palate. It had a nice black pepper spice to it that showed promise, and at times a certain tangy-ness, kind of like orange peel made its way through. It also comes across as a sweeter bourbon, with brown sugar being the primary, traditional flavor that came through.

In the end, I found myself working at getting through this bottle, and I'd much rather enjoy my bourbon. I'm willing to give other Journeyman products a try. In particular, I want to try their Last Feather Rye, as I've found that smaller distilleries such as this can really excel in the rye category. But as to their Featherbone Bourbon, I was disappointed.

Posted by Brian Zeeck at 5:30 PM No comments: