I've never been a fan of booze with aggressive names. I have a perhaps unnatural fear of what such drinks are going to do to me, particularly the morning after. It might all stem from a very difficult morning I experienced in college after spending the night with a vodka by the name of Thor's Hammer. The pounding in my head that morning told me the name was very apropos.

However, I was looking for a new desk whiskey to keep at an office that I frequently work from, and because it's not my normal office, I didn't want to spend too much. So, I averted my eyes downward to the bottom shelf bourbons, and I couldn't help but notice Fighting Cock Bourbon and a striking artistic rendering of a very angry-looking chicken on the front of the bottle.

Upon closer inspection, though, I noticed that it's distilled by the Fighting Cock Distilling Company in Bardstown, Kentucky. This was a sure indicator that, though I had never heard of Fighting Cock Bourbon before, it was likely produced by Heaven Hill, and I thus had a little more faith in the juice contained within. Furthermore, with the uptick in no-age statement (NAS) whiskies, this one prominently displayed that it was aged for 6 years. This was somewhat refreshing.

As to the whiskey itself, the best way I can describe it is that it was better than expected. While I've found that lower-shelf, younger bourbons tend to seem a bit watered down, such was not the case with this bourbon. Although it has a light body, it's a 103 proof bourbon, and it has the same robust characteristics as so many other high-proof bourbons.

It's a lightly spiced bourbon, somewhere in between cinnamon and rye spices. That spiciness is well-balanced with prominent brown sugar and vanilla flavors. What was somewhat unique about this as compared to other bourbons I've had, though, is that I also noticed a strong banana flavor. This blend of flavors reminded me a bit of bananas foster, only without the rum.

This is, however, a young bourbon, and that young age shows with a very noticeable alcohol flavor underlying all the other flavors. I really feel that this bourbon aged for another four years could be fantastic! And, who knows, perhaps Heaven Hill is already producing such a bourbon using this recipe under a different label and I just don't know about it. In the meantime, though, marketing gimmicks aside, I found Fighting Cock to be a pretty good bourbon for its price point.

Posted by Brian Zeeck at 5:30 PM No comments:

I've finally made my first foray into the world of non-chill filtered, barrel strength Scotch, and I did so with the Glenlivet Nadurra. I figured, knowing the general range of the Glenlivet spectrum, this would be a great introduction to the higher-strength Scotches, and it certainly did not let me down!

Clocking in at 109.8 proof, the first thing I couldn't help but notice, even though it was entirely expected, was the alcohol burn on the nose. While I'm used to it with bourbons, and in fact have come to expect it, it was a bit of a change to get such burn while at the same time getting the malty Scotch notes as well. Once I got through the burn, the nose gave way to orange peel and lemon, mixed with some heavy vanilla flavor and baking spices.

The Nadurra has a very oily texture, definitely has legs, and it quickly coated my mouth upon the first sip. This was probably my favorite part about drinking this Scotch, as not only did it temper the burn, but with each drink my mouth and throat were coated in a sweet, honey-butter flavor that seemed to linger forever.

Up front this whiskey is more than pleasant, offering sweet flavors of lemon, orange and honey, underscored by a strong vanilla flavor. On the back end I was hit more with oak and a distinct ginger flavor.
Yet, as enjoyable as those flavors were, it was that lingering honey-butter that kept me going back for more and more. It really reminded me of what I enjoyed most about Scotches in the first place and why I started drinking them . . . only better!

Nadurra maintains the general Glenlivet profile, just a beefed up version. There's no denying which distillery this came from. However, it's definitely on the sweeter end of the spectrum and certainly more robust and complex.

This is a fantastic Scotch, one that left me a little sad when that last sip was gone. I can't wait to give other barrel strength Scotches a try. I may be onto something here!

Grade: A
Posted by Brian Zeeck at 2:47 PM No comments:

Normally I wouldn't go out of my way to pick up a bottle of Dewar's White Label for purposes of getting a bottle that I want to eventually review and put on my site. However, since this bottle was given to me as a gift (or, more accurately, left at my house by a friend who certainly knew better than to think I wouldn't drink it), I thought I'd go ahead and convey my thoughts on the matter.

Dewar's White Label is and always will be in my mind my Airport Hotel Scotch. It seems that whenever I travel for work and stay at a hotel near an airport, I can always count on White Label being stocked behind the bar. I have yet to find an airport hotel with great whiskey selection. Perhaps I'm not researching well enough before I travel. In any event, I find myself frequently enjoying a glass of White Label while sitting by myself at an airport hotel bar.

That being said, though, I really do enjoy the stuff. As a blended Scotch, it certainly differs from the traditional Scotch profiles, though it remains unquestionably a Scotch.  Up front it hits you with a smokey vanilla flavor, underscored by a not-so-subtle oakiness to it.  Most noticeable, though, is the spice.

This particular blended Scotch has a serious bite to it that I don't frequently find in Scotches. It's akin to the bite that I enjoy in my ryes. It has a great blend of both sweet and peppery spice that seem to work really well together (even if that spice caught me a bit off guard the first time I tried a pour).

On the back end it gets a bit more earthy, tasting a bit more herbal and grassy. It goes down very smooth, though and is very warming and relaxing.  Perhaps this is why I make it my go to pour in limited-selection bars.

I'm not going to tell you that this is a "phenomenal" pour, nor that it's my go-to drink. However, it's one that I frequently go back to the well on when options are limited, and one that I will continue to go to. At a cheap price it provides a nice, tasty dram, particularly when you're in the mood for a little spice. 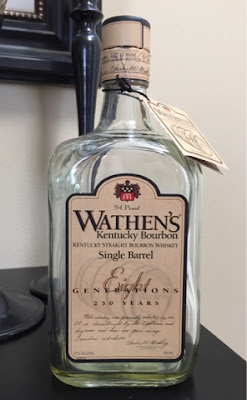 During a trip to Cincinnati, a buddy of mine made a trip across the river into Kentucky to grab a few bottles. While there, the owner of the store he went to recommended this bottle of Wathen's Single Barrel, heaping some high praise on the particular barrel out of which this one was bottled. That's what I've come to love about single barrels, that different bottles will have different characteristics, and some may be better than others.

Having never had Wathen's before, I cannot compare this particular bottle to other bottles I've tried, but I certainly looked forward to enjoying this one.

The nose is your typical bourbon nose, strong on the vanilla and caramel. It also had a light orange smell to it, what was a bit unexpected. Any alcohol burn that may exist in this whiskey is not betrayed on its nose. At 94 proof, it's certainly not a high-proof whiskey, though.

The first thing I noticed when I took my first sip was a distinct nuttiness. I immediately thought of walnuts, but the more I thought about it, the less sure I was that's what it was, perhaps more of a filbert. Either way, this has a very earthy, nuttiness to it. It also had a mild spiciness on the back end as well, though not enough to characterize this as a "spicy" bourbon.

Interestingly, after the bottle had been open for a bit, there was at the same time a fruitiness to it as well. I noticed dark fruit flavors, like cherry or plum, but I also noticed a mild orange flavor as well. This all complemented the traditional vanilla and toffee flavors that dominated.

While at first it came across as nutty and a bit woody, after being open for a while additional flavors came through, making this whiskey more complex than my initial pours. It transformed into a very smooth, enjoyable pour.

It was a bit watery for my tastes. I like flavor that sticks around a while, and that was not the case here. It also struck me as a somewhat young whiskey. There is no age statement on the bottle. If I had to guess, I'd say it's about a 6 year old bourbon. I like my bourbons to be a little older, or at least taste like they are.

Grade: B
Posted by Brian Zeeck at 7:57 PM No comments: 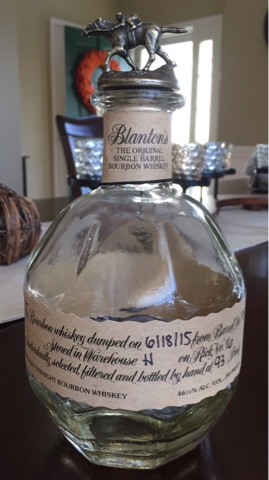 Blanton's is one of those whiskies that has a reputation which precedes itself.  Before even opening this one (and even though I received it as a gift), had a moment of worry that I had set myself up for disappointment. I've had a pour here and there of Blanton's in the past and generally enjoyed it. I also know that it is often a favorite among bourbon enthusiasts.

Finally, though, I got a bottle all to my self and the opportunity to enjoy it from start to finish, and enjoy it I did!

This particular barrel was bottled at 93 proof. The relatively low alcohol content resulted in a very smooth and drinkable bourbon. At first this bourbon came across as dry and woody. However, unlike other bourbons that possess these same characteristics (frequently well-aged bourbons), this one was also very sweet at the same time.

It certainly has the traditional bourbon flavors of vanilla and toffee, though the flavors come across as somewhat mild. There is also a light spice and cinnamon flavor up front, something that was actually a bit unexpected.

On the back end there was a distinct licorice aftertaste, but yet it still remained very sweet. This is a relatively oily and syrupy bourbon, so the flavor lingered quite a bit at the back of my throat.

After this bottle was open for a while it turned into a great bourbon! It transformed quite a bit, turning into a great blend of vanilla and toffee sweetness, much bolder now, with strong anise and cinnamon spices on the back end.  Something about it reminded me of Christmas dinner. Take that for what you will, as I couldn't attribute any specific Christmas memory to it. Just a fleeting notion I had while drinking.

In addition, from beginning to end, I couldn't help but notice a distinct wild cherry flavor. I've had some bourbons where this flavor was a bit overwhelming, but not the case here. It was subtle enough to be noticeable and enjoyable without dominating the other flavors.

At first this was a good bourbon, certainly better than average. By the end, though, this was a great bourbon, one for anybody, whether new to bourbon or a cagey bourbon veteran, to enjoy.

Oh, and the bottle, as well as the cork with the little metal race-horse figure, are about as cool as they get!

Grade: A
Posted by Brian Zeeck at 3:25 PM No comments: