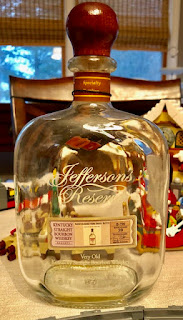 Once again Warehouse Liquors in Chicago proves that they know what they're doing when it comes to picking barrels. Having never run across a private select from Jefferson's, and being a fan of Jefferson's generally, I had to pick this one up and give it a loving home.

The nose was interesting. It had almost a cola scent to it. It smelled like a Vanilla Coke, just with not as much vanilla in it. It was sweet with absolutely no burn. The notes were subtle, and it certainly wasn't pungent, but what was there made me eager to try my first pour.

Unfortunately, I went in with high expectations, having loved every other private selection I've tried from Warehouse Liquors, and initially this one underwhelmed. It came across as soft and simple, with no complexities and very straight-forward flavor. Initially I got a bunch of amaretto flavor, but on the sweet and mild side. It was almost candy-like in this way, though I just couldn't think of a candy to compare it to.

I also got notes of milk chocolate and caramel, and while all of this sounds good, each of these flavors were soft and muted, and I really wanted more from it.

However, as I made my way through this bottle over the next few weeks, this bourbon just got better and better as I went. What was disappointing at the start, ended up exceeding my expectations and turning out to be a great whiskey!

The amaretto, which was the most forward flavor to start, seemed to fade to the background, making way for the milk chocolate and even a marshmallow note. It also seemed to get sweeter and sweeter as it went.

The last few pours were like drinking candy corn and buttery marshmallows. It also maintained a cereal quality, like Corn Checks, throughout, that, when mixed with that buttery marshmallow, made this a dessert-like whiskey that I found myself craving. It was as though I developed a sweet tooth for this whiskey.

Considering the first few pours were underwhelming, I nonetheless give this whiskey a high grade because of just how strong it finished. By the end I found myself wishing I had grabbed another bottle for future consumption. This is one of those bottles that reminds me why I prefer writing my reviews only after I've finished a bottle.

It's certainly easy to get caught up in all the limited releases, barrel picks and fancy whiskeys sitting on the shelves these days, without consideration for the standards. I feel I've long ignored some of the basic ryes out there and I intend to remedy that situation.

So, I started off with Jim Beam Rye. Right or wrong, I've always used white label as my kind of baseline, the bourbon against which I compare everything else, serving as my standard "C" grade bourbon. So it only seems right that at some point I give the rye a try.

Admittedly, I went into this expecting something average, and it proved to be much more than average. The nose gave off a light cinnamon spice and minimal alcohol. It wasn't strong, though, and I had to hunt for the flavors.

Luckily that wasn't the case with the palate. The flavor of this rye is actually quite good. I got the cinnamon from the nose that carried from the beginning to the end, providing a decently long and spicy finish. It was also sweetened by some vanilla as well as a surprising light butterscotch note. These flavors and the sweetness complemented the lingering spice very well.

Despite it being watery in texture, it was still full of flavor and the flavor stuck around for quite a while, with a decent coating of the mouth, especially given the watery texture and low proof.

Interestingly, after leaving the bottle open for a couple weeks, it developed a very distinct pine flavor. It wasn't strong, but it was certainly noticeable. The pine flavor played well with the cinnamon, but seemed to be at odds a bit with the butterscotch.

This also came across as a younger rye. It was a bit jagged and rough around the edges, with sharp notes and, despite the low proof, some burn. However, for the price, it's a good rye and one I wouldn't hesitate to buy again. It certainly exceeded my expectations and was a nice surprise.

Let me just start this out by saying that I love Buffalo Trace's mashbill #2. It seems to be my ideal flavor profile, and as a result I find myself frequently favoring the Blanton's, Rock Hill Farms and Elmer T. Lee's of the world. Hancock's President's Reserve, however, seems to be the red-headed stepchild of the mashbill #2 line. This lower proof version is not advertised on the Buffalo Trace Distillery website (see for yourself), and it seems to hit the shelves with the same limited frequency as Elmer T. Lee and Rock Hill Farms.

That being said, it is nonetheless without question a mashbill #2 bourbon. The nose is caramel and light cinnamon spice. It also has a hint of burnt orange and maple, giving it a nice, rich aroma.

Likewise, the first sip is full of that vanilla and caramel up front that I've become accustomed to with these sweeter yet slightly spicy bourbons. The back end has that nice cinnamon tingle that sticks at the back of your throat for a while.

Compared to the others in this line, this is, as expected, a bit watery in texture. That being said, I didn't feel as though it lost any boldness in flavor. It still has all its sweet and spicy character, just with minimal to no burn.

In later pours, the profile changed slightly, but quite frankly for the better. It seemed to develop a very tasty orange note, which I had noticed on the nose but up to that point missed on the palate. That orange seemed to mingle with the caramel and a sweet brown sugar to add some nice complexity to an otherwise thinly-textured bourbon.

The back end also developed an almond flavor that hung around with the cinnamon spice at the back end of each sip I took, leaving behind some much-welcome flavor to go along with the spice.

I'm a big fan of this as far as low proof bourbons go. Many refer to Basil Hayden's as a good bourbon to give to someone to try who is not familiar with bourbon. Availability aside, this to me would be a far better option. It's just not practical when it's not readily available. Again, my bias here is freely admitted, but for a lower proof bourbon, I found this to be excellent!!