Old Fitzgerald Bottled in Bond is one of those bourbons that I've always felt I should have at least tried once, but never had. Not that it was really tearing at me, but I finally made it a point to grab this lower shelf bourbon so that, at the very least, I could remove that nagging need to be able to say that I've had it before.

The nose is somewhat traditional, with a light vanilla scent mixing with a light cinnamon spice. It also had a bit of oak to the nose, which was unexpected given its young age.

When I took my first sip it came across as pretty watery in texture. It has the viscosity of Beam white label, and, unfortunately, it also has the complexity of Beam White Label or lack thereof (Note: I have nothing against Beam White Label--it's just my measuring stick for what I'd consider your basic bourbon).

On the first pour I noticed that this bourbon lacks sweetness as well, and come across as kind of boring. While the nose had the traditional bourbon notes to it, the flavor seemed more reminiscent of an American Whiskey, a whiskey that has a mashbill that isn't quite made up of the 51% corn needed to be called a bourbon.

As the bottle had a chance to open up (I gave it a good two weeks), it did eventually develop a light sweetness and the corn seemed to come through a bit more. I'm assuming the two went hand-in-hand here. It was like the flavor of corn flakes with a small amount of sugar sprinkled over them, like the cereal I used to have to eat at my grandma's house (though I'd sneakily dump a pound of sugar in my bowl when my grandma wasn't looking).

It seemed as if this bottle continued to get slightly better with each pour, as I found it boring and lacking in flavor to start, and at the end it was sweet and enjoyable. It also developed some complexity that I never expected at the start, introducing flavors toward the end of the bottle that were nowhere to be found at the start.

A.D. Laws is a distillery out of Colorado that seems to have burst onto the bourbon and rye scene. Despite that it's relatively new to our shelves here in Illinois, they are nonetheless stocking those shelves with a variety of different bourbons and ryes, including bottled-in-bond offerings such as this Secale Straight Rye.

Admittedly, I picked up this bottle having no clue what "secale" rye is, and I had to look it up when I got home. It's apparently a type of cultivated wild rye, offering a different flavor than the standard, domesticated ryes typically used for whiskey. However, in this case, it appears to be a Colorado-sourced rye that they use, keeping it local (per the label on the back of the bottle).

The mashbill is an interesting mix of 47.5% raw rye, 47.5% malted rye, and 5% malted barley. This, too, I had to look up after my first sip, because I thought I was getting a LOT more malted barley than just the 5%, both on the nose and on the palate.

The nose is sweet and very malty. It has a very distinct butterscotch scent that is very inviting, but it also has a little bit of bite, a light peppery spice to it that seems to really contrast with that sweet butterscotch note.

The flavor is really unique, and far from any other rye I've had before. It's very much like a 50/50 blend of Scotch and rye. There is a very strong and smokey malted barley flavor, along with the butterscotch flavor that I commonly associate with a Speyside single malt.

It is incredibly sweet throughout, almost molasses like. It still has those brown sugar and cinnamon spices that I get out of typical ryes, but that cinnamon blended with the butterscotch all comes together with almost a rum cask finish to it. While many people enjoy rum cask finished whiskeys and might enjoy that characteristic in this one, I am not one of them.

The finish threw me off a bit with a light mintiness to it that just did not seem to fit in with anything else that was going on, and that mint note seemed to linger forever, to the point where I was taking my next sip just to make it go away.

All in all this was a unique pour with lots going on, but it all just did not seem to work together for me. Certain characteristics on their own were good and tasty, but altogether, it just came across as a bit weird. Nothing about it was inviting me back for more, and I found myself finishing this bottle off more out of desire to get through the bottle to write the review than out of enjoyment of the whiskey.

I had only heard about Blanton's store picks, or better yet, read about them on social media and in online forums. To me they had always been nothing more than mythical creatures. But one day I walked into Warehouse Liquors in Chicago, having heard that it's a great source of private select bottlings, and right there at eye level staring back at me was this mythical beast, begging to come home with me. So home it came.

I will say up front, that having finished this bottle and being part way through a Warehouse Liquors private selection of Eagle Rare, these people know what they are doing! I have definitely found a go-to source for private bottlings that I can trust sight unseen (flavor untasted?)!

Right away I fell in love with the nose on this. It was a sweet amaretto flavor, kind of like almond cookies, along with cinnamon and some light wood notes that made for a nice sweet and savory scent. It was a delicious, pungent smell that you could notice from even a couple feet away.

With the first sip, I immediately noticed that this is a sweeter version of Blanton's than what I've had before, but it's a light sweetness, as opposed to a heavy, in your face sweetness. It wasn't sugary, but rather had that sweetness that you get from confectioner's sugar when it's sprinkled on a funnel cake, for example.

The bourbon is delicious and smooth, as would be expected from any Blanton's product.  The traditional vanilla and caramel are certainly prevalent, along with a nice amaretto tang that carried over from the nose. The sweet caramel and amaretto notes really seemed to linger on the finish for quite some time, often urging me to go in for that next sip or, if I was at the end of my pour, for the next glass.

I also found that it had a light and subtle smokiness to it. It wasn't overt, and at times it seemed to almost disappear, but then a few sips later I'd notice it again. This was a complex, and yet simple bourbon, as though it didn't try hard to be special, yet it nonetheless managed to compel me to go back for pour after pour, as opposed to having something else from my stash on a particular night.  Warehouse Liquors nailed this one, and I hope they continue getting these mythical beasts into their shop!

Grade: A
Posted by Brian Zeeck at 5:00 PM No comments: 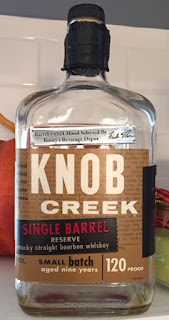 I feel like I start off every review of a Knob Creek Private Select the same way, touting the great value and the fact that for the price, you're guaranteed at the least a very good pour, if not a great pour. Well, here I am doing it again, because these Private Selects continue to not disappoint, no matter which one I grab.

Binny's got in a bunch of barrels at once, and this was among the older of them, the oldest being a 13 1/2 year old. It didn't come recommended to me as with the last one, but how wrong could I really go hear?

The nose is heavy, full of burn but also full of flavor. It was pungent cinnamon bread on the nose. I'd say cinnamon roll, but it didn't seem to have that sweetness. Rather, it was cinnamon and grain, leading to a very inviting nose. After being open a bit, the nose also developed a dark cherry scent that seemed to fit right in with the strong cinnamon and bread notes.

The first sip I tried was an absolute cinnamon bomb, accompanied only by a heavy alcohol burn, which seemed to dissipate pretty quickly. There was also a significant amount of vanilla present, but it was dominated by the heavy dose of cinnamon on the tongue.

After being open for a bit, it sweetened up significantly. Where before it was primarily cinnamon and unsweetened vanilla, it added a welcome bit of a honey flavor that went perfectly with the cereal and bread notes that were present throughout, though, much like the vanilla, were also dominated by the cinnamon notes.

Towards the last few pours, the honey notes seemed to get stronger, as though they were fighting to compete with the cinnamon. Cinnamon and honey is not a combination that I would seek or would ever have even thought of as a good combination, but it certainly worked. This bottle carried heavy heat throughout, but not to the point where it turned me off. Rather, it helped with the complexity and the strong flavors.

Based on the age of the bourbon and the nose, I had half expected to get some significant wood notes, but they were noticeably absent throughout. As someone who doesn't like anything more than just a little dry woodiness, this was a plus.

All in all, this was a very good pour. While it didn't reach that greatness that some Private Selects I've had in the past have reached, it still didn't disappoint, and I enjoyed it from beginning to end!