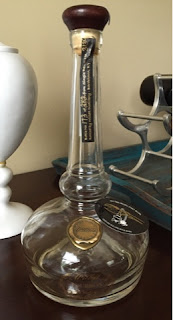 This is another one of those whiskeys that I've been wanting and meaning to grab for a long time, but for one reason or another, I always passed it by. Apparently I'm not the only one, though. When I grabbed it off the shelf at my corner store, I had to wipe off a considerable layer of dust. I hoped this would not be some sort of foreshadowing, some kind of message that there's a reason that much dust was able to collect on the bottle.

However, upon first popping that cork, I knew I was very safe with this one. The nose was a distinct chocolate malt. In fact, I couldn't get over just how prominent the chocolate was on the nose, and I found myself sniffing it frequently.

On the palate, however, the chocolate wasn't as prevalent. As much as I enjoyed the nose, I kind of wished it were. Rather, it had a peppery flavor up front, something I usually find on the back end of bourbons. On the finish that spice was covered up by unsweetened vanilla, reminiscent of vanilla extract, as opposed to, for example, vanilla ice cream.

The finish ended up being what I enjoyed the most with this bourbon, actually, as in addition to the vanilla, there was a brown sugar and cinnamon flavor that came through, almost in succession, like a parade of different, enjoyable flavors, one after the next.

As I made my way to the bulbous bottom of the bottle, the vanilla remained prominent, but I also noticed a nutty, walnut flavor that seemed to complement all the other flavors very well.

Overall, this bourbon is not too bold or complex, and at the same time, it's far from simple. It's full of flavor, but rather than having layers of flavor, you're almost hit with each flavor one at a time. In that sense, I found I didn't have to really go searching for any of the different flavors. It's a very drinkable bourbon, and the layer of dust was clearly not any sort of commentary on the contents within the bottle.

I feel like it's been a while since I visited the lower shelves, and, quite frankly, I feel like I'm doing myself a disservice. While I have been lucky to run into some really nice bottles of top shelf bourbon lately, there's so much value to be found on the lower end of the spectrum that it simply should not be ignored.

So, I grabbed a bottle of Dickel. At $24, it's incredibly reasonably priced. I'm not sure, quite frankly, if I've had it before, whether at a bar or elsewhere, and even if I have, it was probably in a mixed drink. This time I was going to give it my full attention and a chance to stand on its own.

Much to my surprise, it stands up very well on its own. It's a different flavor than bourbon, and I even found that it differed quite a bit from it's primary Tennessee Whiskey counterpart, Jack Daniels. The charcoal that I expected to permeate wasn't really there. Rather, the nose was a healthy mix of banana and tobacco leaf, which even seems like an odd combination as I type the words, but yet it worked well.

The palate is sweet, but does not cross that line into being overly sweet. I primarily noticed an odd mix of banana and pine (and this mix was about as odd as it seems when I type the words). Underneath that weird mixture, however, is a light spice blending with vanilla and wood tones that were quite enjoyable once I got to them.

On the back end is a light pepper spice along with a light smokiness. The charcoal that I expected from the beginning also started to creep its way in right at the end.

All in all, I was surprised at the complexity of this whiskey, considering it's somewhat of a staple bottle. Although it's complex and offers a lot of different notes, sometimes resulting in an odd commingling of flavors, none of the flavors is particularly overpowering or bold, which makes it nonetheless easy to enjoy. Although I'd imagine this is a popular whiskey for mixed drinks, I found it to be pretty enjoyable on its own, particularly at its price point.

Grade: B
Posted by Brian Zeeck at 6:46 PM No comments: 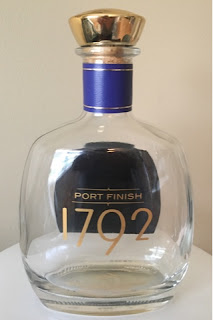 I keep a list in my Notes app on my phone of all the whiskeys that I want to eventually try. Some of them on this list are readily available, and I just haven't gotten around to trying them yet. Others are a little more difficult to find. However, there are certain releases that I don't bother putting on my list because, quite frankly, they are no-brainers when I find them.

At only $44, and with only one left on the shelf, the 1792 Port Finish was one of these no-brainers. I knew it was released, but I had never seen it in the wild before then. Given that it's a special release and at a relatively easy-on-the-wallet price, I honestly didn't expect that I would stumble upon one. When I did happen to stumble upon a bottle, there wasn't a moment's hesitation to grab it.

I'm not going to bury the lead on this one. This stuff is incredible! The port influence is very noticeable on the nose. However, the nose on this is one of the most complex that I've ever enjoyed. It's packed with dark fruit and plum notes, but the traditional vanilla and caramel flavors are readily present as well, and they all blend together perfectly.

On my first sip, I couldn't help but notice how incredibly smooth this is. It's not a high proofer, but it still had absolutely zero bite. Rather it had a velvety, silky smooth mouthfeel that coated well.

The fruit forward profile of this bourbon seemed to go perfectly with the texture, too. Grape and plum were at the forefront of each sip, showing the strong influence of the port. Despite being fruit forward, though, the vanilla undertones seemed to balance it out perfectly.

If you're looking for something spicy, this is not your bourbon. However, if you like something on the sweeter side that is not going to be overly or sickly sweet and will offer a lot of complexity and depth, then this is where you want to go. Finished bourbons can so frequently be overwhelmingly influenced by the barrel in which they are finished. Barton 1792 got the balance of the sweet port influence perfect with this one.

I was truly sad to pour the last drop. Even as I sit here and write this, I wish I could pour another glass. By all means, if you find a bottle on a shelf somewhere, grab it. At this price, it's a can't miss!

There's always something about that exclusive bottle, the one that's only available at the distillery, the one that I won't be seeing here in Illinois, at least not any time in the immediate future, that just makes me want to have it. Usually it's a bit of a passing feeling, as wanting what I'll never have seems like a waste of time. But, in the case of High West's Yippee Ki-Yay, I actually had a real opportunity to get my hands on a bottle, despite it being available initially only in Utah.

Luckily for me, a friend of mine, the same one who likes to bring me back bottles from his trips to Cincinnati, also makes regular trips to Park City, Utah. So, when High West announced Yippee Ki-Yay, a blend of two ryes, one finished in a vermouth barrel and one in a syrah barrel, and further announced that the first batch would only be available at the distillery, I immediately texted my buddy, knowing he had a ski trip coming up. Lucky for me, when he returned from his trip, he did so with a bottle in hand!

The first thing I noticed is the very reddish hue to the whiskey. It was not only dark, but clearly red, likely from the wine barrel finishes.

On the nose and on the tongue, however, the first thing I noticed was how incredibly sweet this stuff is. It came across heavy on the cane sure, seeming as though rather than being wine barrel finished it was rum barrel finished. It reminded me a lot of the Angel's Envy Rye in this respect. To be honest, the substantial sweetness was a bit overwhelming.

Beyond the up-front sweetness were some really enjoyable flavors, however. There was a sweet cereal flavor to it not unlike that of graham crackers. According to the label, the rye used is High West's Double Rye, and the rye spices eventually make their way through the front line of sugar as well, adding some cinnamon to the finish that would linger around for a while.

In the end, however, the flavors from the vermouth barrel seemed to influence this rye the most, even overpowering the typical, more strong-willed rye flavors and spices.  I really wanted to love this whiskey, but in the end it was, for me, good-but-not-great.