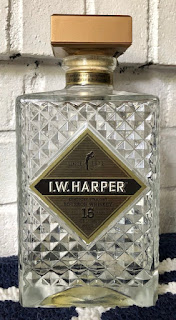 Over the years I've seen this bottle sitting on the shelves off and on. I'll see it, think about giving it a try, ultimately passing, and then I won't see it for a few months. However, it invariably shows up again. And the main reason I notice it is the sparkly, decanter type bottle that it comes in. While the age is certainly noteworthy as well, the bottle is simply easy to remember.

And yet, I never bothered to pick one up, despite the nice package and the age of the whiskey. For whatever reason, it just didn't appeal enough to me, almost as though it were trying too hard.

However, when a coworker is giving me one as a gift, I'm far from the type of person to turn it down, and so I accepted, opened, poured and enjoyed.  After all, the neck-label tells me that, "Anywhere, any time, it's always a pleasure." I took that quite literally, immediately giving this a swig at the office.

The nose is very heavy on the cinnamon. It immediately comes across as spicy and even a bit dry. It has distinct vanilla undertones. Also, I don't know if it comes from the wood or what, but it had a certain peanut note to it. Along with these somewhat earthy notes, I also got a slight bit of cherry and even some citrus, kind of like orange peel.

The first thing I noticed when I took a sip was the watery texture. I guess that's to be expected at only 86 proof, but given the age, I anticipated a bit more of an oily mouthfeel nonetheless. That simply wasn't the case. As a result, I felt the flavors were more subtle than expected too.

The most prominent flavor is the oak note that was consistent from beginning to end on this bottle. It's well-aged and it shows. I've had other 15 year bourbons where the influence wasn't nearly this strong, but this whiskey certainly had a bit of a chewing-on-a-stick quality to it.

Beyond the oak notes, however, it had some nice flavors going on, even if they were a bit muted. I got a primarily vanilla flavor that was almost as if it were coated in cinnamon and chocolate. In fact, that chocolate note, which was more of an unsweetened type of chocolate, became more and more pronounced as I made my way to the end of the bottle.  I also got a flavor that reminded me of corn flakes (but without the two tablespoons of sugar that I would otherwise pour on top of my cornflakes because I'm twelve). I wasn't a big fan of this note, as it just didn't seem to work with the other flavors going on here.

In the end, this is simply an oak-forward whiskey--not in a bad way, necessarily, just in a defining way. For those who like a good, dry, oaky bourbon, this might be their thing. For me, however, after a while it just seemed to become taxing, and I just couldn't enjoy it as much as I wanted to.