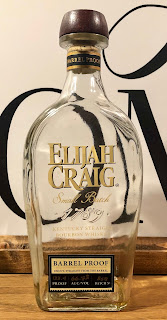 There once was a time that I swear these bottles couldn't be found anywhere. a few years ago I remember feeling like I hit the jackpot when my local guy got three bottles in, and a few more of the following batch. I was buying them, even at his slightly marked up prices, as if they might vanish off the shelves otherwise.

Now, however, it seems as though they're at least somewhat available upon each release. In fact this one I've seen multiple times in multiple shops. But don't get me wrong, I'm not complaining.  This is a good thing!!  These are consistently one of my favorite bottles, and I will never hesitate to grab one off the shelf.

One of the consistent characters I've always gotten in the Elijah Craig Barrel Proofs is a heavier-than-most dose of vanilla.  Here, the nose at least did not let down. The vanilla seemed to pour out of the top of the bottle. It was accompanied but some earthier flavors, however, with some anise and some woodiness mixed in. I also got slightly bitter coffee notes. Along with those scents, however, were some nice dark fruit notes, like plum and even blueberry. This stuff smelled amazing!

In the flavor, the anise was not nearly as strong as it was in the nose, which for me was a good thing.  Rather, it had some pretty strong caramel and amaretto notes.  Unfortunately, the vanilla I got on the nose wasn't nearly as prevalent in the flavor, and almost nonexistent.

What seemed to take its place, though, was a whole lot of brown sugar. That sweetness was cut a bit, though, by that same wood note that I got on the nose. It didn't come across as bitter in any way.  Rather it just made it a bit more dry and mellowed out the sugar a bit.

On the finish I got almost nothing but caramel, though this is where what little vanilla there was finally came through.  That caramel was long and strong, though, leaving me smacking my gums after each sip.

On the final few pours I got a distinct Coca-Cola flavor. Not just a generic cola flavor, but it actually tasted like Coca-Cola. Once I got that not, I couldn't seem to avoid that note, and it was hard to focus on the other flavors that were there. Luckily, though, it was a delicious flavor that seems to be a late-blooming marriage of everything I had before then.

While I wish some of those dark fruits, and especially that blueberry note that I got on the nose, came through (I think that would have been amazing!), I still really enjoyed what was here. It was a dessert whiskey that packed a punch. Quite frankly, that's what I've loved about all of the different batches of Elijah Craig Barrel proof, and that's why it never lets me down.