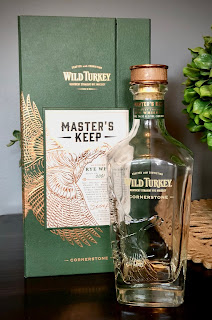 It's not often that a new product is coming on the market and I get into a "have to have it" mode. I tend to be more of an opportunistic bourbon purchaser, rather than actively hunting for particular bottles. However, when I read that Wild Turkey was doing a rye for their next Master's Keep release, I knew I had to get my hands on one. So, I put my feelers out there, and let every store owner and manager know that I wanted to get my hands on one once it came out.

One day I did get that call from my local store manager, letting me know that it came in and she had set one aside for me. At the time I didn't realize just how pricey it would be, or that the price would cause this bottle to be more available than my efforts had warranted. But, I got my hands on one nonetheless, so I was happy, and I only hoped that the flavor would live up to the very steep price.

On the nose I got a lot of rich, creamy caramel. I also got some black pepper spice as well as a light cinnamon note. There was also a sort of burnt sugar note, perhaps like caramel with a bit of char. At first the nose came across as very sweet and dessert-like. Later on, however, the spiciness seemed to come through more, and I felt the black pepper became more noticeable.

When I took my first sip, the fist thing I noticed was the thick, oily viscosity that this whiskey had--a sign of good things to come. Immediately up front the tip and sides of my tongue where hit with spicy cinnamon and cloves that immediately made my mouth water. Of course, the caramel that dominated the nose was prevalent throughout as well.

It wasn't entirely a dessert-like whiskey, though. There was a bit of an old fashioned note to it, as I got some orange peel, some bitter tanins and some luxardo cherry notes. That mix didn't overwhelm, but it certainly made for an interesting and delicious pour.

Towards the end, it did seem to sweeten up a bit, but the rye spice seemed to temper it and keep it from ever getting too sweet. I got a sort of a molasses note that reminded me a bit of oatmeal cookie. However, as sweet as it seemed, it was always balanced by cinnamon and black pepper spices, as well as some flavor from the barrel, like the char and tanins. It all seemed to work perfectly to give a perfect mix, even despite that it trended sweeter than I normally prefer in a rye.

In the end, with the price tag placed on this whiskey, the question is, "Is it worth it?" Although it was very pricey and hard to justify on that objective fact alone, I found this to be one of the best whiskeys I've ever had, and for that reason, I, personally, did not regret my purchase. The fact of the matter is, regardless of price, this is a great rye!