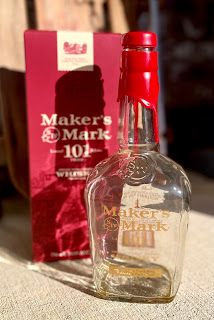 VITALS:
- $45
- 101 Proof
- NAS
- Kentucky
For so long Maker's Mark just produced their standard bourbon
--regular Maker's Mark.  It's a fine whiskey and they do a great job with it. But, as the bourbon boom emerged and with the prevalence of limited releases, bourbon hunting, private picks and variants, Maker's Mark seemingly reluctantly changed with the times as well, introducing a cask strength version, a private barrel program and, more recently, an annual limited release.
Adding to its existing line, though, Maker's Mark released this 101 proof, something somewhere between regular Maker's Mark and its cask strength version--a little higher proof but not quite the fire water that might turn some people off  It seems to me there certainly should be a market for this product, whether for cocktails where the bourbon needs to shine or just for those drinkers that want a touch more heat. I was more than happy to grab one off the shelf to see where this might fit for me.
On the nose I got a lot more cinnamon than expected.  I'm not sure if that's due to the increased proof or what, but it was a good, pungent nose that just hit with cinnamon spice. I was able to get some molasses, adding a bit of rich sweetness, and I also picked up some graham cracker and sweet bread, two notes that I've come to expect from Maker's Mark over the years.
I feel like I relate my tasting notes a lot to cookies, but, I guess given the sweetness of bourbon, that's not so weird. And here, my first tasting note was chocolate chip cookies. But, it seemed even sweeter than that, as if milk chocolate chips were used rather than semi-sweet morsels.  It was very brown sugar forward, and even a bit buttery in taste.
I also got hints of an old fashioned flavor as well. I got some orange peel which added some brightness as well as some complementary bitterness. I even got a bit of cherry licorice.  This all seemed to work really well with the constant toffee note throughout.
The sweet bread from the nose came through as well, with a bit of a yeasty note as well as a bit of a grain-forward note. This, too, was on the sweeter side, but it did offer just a bit of earthiness to try to counterbalance all the other sweet notes.
However, that seems to be the recurring theme here--sweetness.  No matter what flavor I was getting, it was always a sweeter version of that. And the cinnamon spice I got off the nose was, unfortunately, nowhere to be found, and I found myself wishing this had a bit more spice. That is a personal preference, though, and perhaps someone who is a fan of wheaters would absolutely love this. Ultimately, though, this whisky makes sense in Maker's Mark's lineup, and although the box that this bottle came in says it's a "limited edition," it would make sense for this to be a mainstay on shelves.
Grade: B
Posted by Brian Zeeck at 4:00 PM