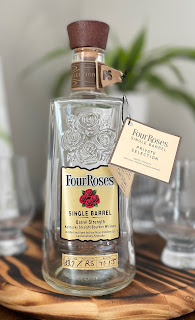 This bottle is kind of a weird one. I was talking with a neighbor one day and he told me that a mutual friend of ours had picked up a cask strength Four Roses single barrel at Meier. Knowing that the only way that could be the case would be if it were a store pick, and doubting that Meier, of all places, would have a Four Roses private barrel, I texted my friend for a picture. What he sent me was equally strange.

While it certainly was a Four Roses Private Selection, it didn't indicate in any way who it was selected by. The label just read, "Specially Selected By" and immediately below that was a cartoon drawing of a barrel on its side. No indication as to who this was selected by or for. That said, when I was next in Meier, I couldn't help myself, and I went to the liquor store aisle, and there, pushed all the way to the back of the shelf, was one remaining bottle. I took a look, saw the OBSF mashbill and the 9 years, 11 months age statement, and I figured, "What the hell!" At the very least I was curious about this mystery selection.

The nose seemed to have a significant cereal note to it, as well as a healthy amount of cinnamon. It was kind of like cinnamon Cheerios, or even Cinnamon Toast Crunch but with the sugar dialed down a bit. I also got a light chocolate note along with a light peanut note. There was also a bright but slightly bitter orange peel note on the nose as well.

The first note that I got when I took my first sip was an Old Fashioned. The cherry was right up front, with more of that Maraschino cherry flavor. I also got that same orange peel note that I was getting on the nose. It even had a bit of a splash of cola, which really seemed, for some reason, to round out that Old Fashioned note.
There was a bit of an odd note that I got as well, something like a cleaning solvent. My mind went right to that stuff you use to clean wood that smells like orange, but I've never actually tried tasting that, so I'm not sure if that's a fair comparison or not.  It's what I'd imagine that stuff tastes like.  It wasn't a strong note, but it was there.
On later pours the cherry and cinnamon really seemed to take center stage. The cinnamon always remains sweet with a light spice, kind of like cinnamon cereal, I guess.  The cherry note, however, seemed to stray from that great Maraschino flavor to more of an artificial cherry candy flavor. I know many people like this note, but I'm not among them.
Unfortunately, on the finish that cherry candy note came across as more of a cherry cough syrup or cough drop that seemed to linger, particularly in the back of my throat. This was certainly a bit of a turnoff to me, and I was surprised that this note seemed to develop toward the end. It's not often that I get a bottle that seemed to taste worse on the last few pours than on the first few, but this was one. That said, the mystery behind it still intrigues me, and I know if given the chance I'd do it all over again.
Grade: B-
Posted by Brian Zeeck at 5:00 PM