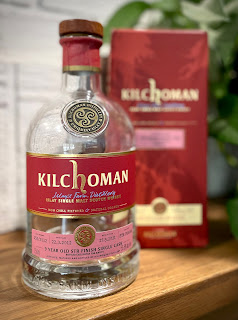 VITALS:
- $130
- 11 Proof
- 9 Years
- Cask No. 153/2012
- Islay
I do love me a good, peated Scotch, particularly one finished in a wine cask. I've also found that I'm not the biggest fan of toasted barrel finished bourbons. They just haven't done it for me. Nonetheless, I was intrigued at the idea of a toasted finish on a peated Scotch. This Kilchoman private pick from Binny's gave me the chance to quash that intrigue.
This single malt is labeled as an "STR" finish. What that means is that Kilchoman took this peated single malt that had been matured in ex Buffalo Trace bourbon barrels and finished it in red wine cask that had been scraped or shaved, toasted and then re-charred--hence the "STR."  It was finished in this STR barrel for 18 months. So, whatever influence that barrel was going to have should certainly be prevalent and noticeable.
As expected, the nose is very smoke forward. I didn't get very much bright fruit or any wine notes as I had hoped for. But I did get something more earthy, along the lines of fig or maybe even raisin. It also had a bit of a resin note, along with something meaty, almost bacon-like.  This all sounds weird, I realize, but it all kind of worked together in a sort of sweet barbecue sauce kind of way.
As to flavor, right up front I got that great mix of sweet and peat that I absolutely can't get enough of. Here the bright fruits did come through, as I got red raspberry and some dark cherry. I even got a bit of currant adding just a touch of tartness.
There was also a caramel note, though richer. Perhaps more like a toffee note with a touch of dark chocolate. The peat smoke, of course, carried through out, but was always complementary rather than overpowering. It never slapped me in the face but always took a back seat.  There was also a certain spice to it, almost like cloves but not as strong, that provided a great balance to the smoky sweetness.
What made this bottle an absolute stand-out, though, was the finish. After each sip my mouth was coated with flavors of cherry pie filling, along with this sweet dessert-like note of brown sugar and butterscotch. That butterscotch note seemed to almost come out of nowhere and it just stuck to the back of my throat like I had just eaten a butterscotch candy. On the finish the peat continued to be there but again more in the background, letting all these other delicious flavors linger around seemingly forever.
Up until the finish, this was a very good whisky. As soon as that finish hit, though, even on my very first sip, I knew this was an outstanding single malt! If you can still find it on the shelf, grab it!
Grade: A+
Posted by Brian Zeeck at 5:00 PM