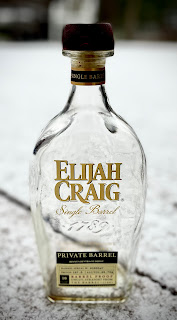 VITALS:
- $70
- 127.5 Proof
- 10 Years
- Barrel No. 6088347
- Kentucky
There's no doubt that I, along with pretty much any other bourbon fan I know, love Elijah Craig Barrel Proof.  While I can't keep up with every release, I tend not to hesitate to grab one whenever I get the chance.  It has that nice mix of age and proof, with the quality backing of Heaven Hill making the whiskey. And the price has always remained relatively reasonable.
When Binny's started getting in single barrel picks of the Barrel Proof, I was all over them. In fact, I ended up getting three different picks, all different ages and proofs. I've had a blast comparing them all side-by-side, and this bottle just happens to be the one that I finished first.  Whether it's my favorite of the three, the jury is still out. I've really liked them all. This one is certainly in the running, though.
The nose was rich and sweet and tangy all at once. I immediately got toffee and orange peel. There was a light smoky or char note, but it remained sweet, like burnt sugar. It also had this spicy but chocolatey note, kind of like a Mexican dark chocolate.
As to flavor, much like the nose, this was very toffee forward. It was richer than a basic caramel note, and not quite as sweet, though it was still plenty sweet.  It also had a delicious vanilla bean note that kind of underscored everything else. The chocolate note from the nose also came through, though it was sweeter, more like milk chocolate, and it didn't seem to be accompanied by any spice. It did, however, work incredibly well with all the other flavors that were happening.
The heat was certainly present, which is not surprising given the proof. But, it seemed to give way to the other flavors relatively quickly. That said, the spice that may have otherwise been masked then came to the front. I got a distinct black pepper spice that mixed with a root beer note. That combination lingered in the back of my throat long after each sip, and it gave that great sweet and spicy mix.
The toffee note persisted through to the finish as well, though at times it seemed more like a butterscotch. While the spice lingered at the back of my throat, the sweetness lingered on my lips, giving it a nice sweet, lip-smacking finish as well.
Priced about $10 higher than the regular barrel proof releases, though a couple years younger, this was a great buy. The whiskey is fantastic, the pricing is still fair, and the differences from barrel to barrel are fun. I can't wait to keep scooping these up as I find them!
Grade: A
Posted by Brian Zeeck at 5:00 PM