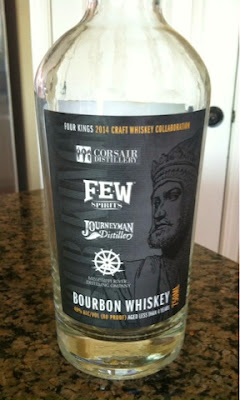 Earlier this Summer, in conjunction with Whiskey Fest in Chicago, four local craft distilleries got together (with some coordinating from Binny’s) to create Four Kings. Corsair Distillery, FEW Spirits, Journeyman Distillery and Mississippi River Distilling Company each contributed 30 gallons of their whiskey to create this blend.

With only a limited supply that would primarily be available in the Chicago area only, I had to get my hands on a bottle. I was also very intrigued by the inclusion of the smoked wheat whiskey and what kind of flavor that might add.

A couple days after the release, my having not gotten off my butt to go out and grab a bottle, I began seeing tweets from the distilleries about this stuff selling out rapidly, so I called my local Binny’s and reserved the last bottle they had on their shelves.

Upon cracking the bottle, I didn’t notice anything too striking on the nose. In fact, it didn’t have the typical sweet, corn aroma that comes with bourbons. Perhaps that should have been my first sign that I might be disappointed.

Maybe I was expecting too much, but this whiskey, despite having received tons of hype and great reviews, did not immediately impress, lacking the boldness of flavor that comes with older whiskeys (this one had an age statement of “less than 4 years”). The smokiness of the wheat did not come through as much as I would have liked, leaving a primarily nutty flavor, with only slight hints of oak and vanilla.

I will say, however, that after opening the bottle and letting it sit, the flavors changed dramatically, turning this whiskey into something that I am now sad I no longer have. It was still a young whiskey, so it still lacked some of the depth you’d expect from an older whiskey. However, it sweetened significantly, with bolder vanilla flavors and even hints of butterscotch, underscored by a more prevalent oakiness.  A couple weeks after opening it, and it was as though the whiskey had undergone a sort of metamorphosis from something blah to something great!

This is one of those specialty bottlings where, once it’s gone, it’s gone for good. Had I had the chance, I may have purchased more (or more accurately, had I not been so slow to get off my butt). It was a bit pricey at $50, particularly for only being 80 proof, but I nonetheless enjoyed trying something different, even if there are better bottles to be had for that price.