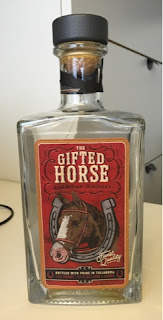 Orphan Barrel released its newest "orphaned" whiskey, only this time it is not a well-aged bourbon that was somehow forgotten about, but rather it's, per their claim, a mistakenly blended whiskey, the result of accidentally emptying barrels of a younger whiskey into a batch of 17 year old Kentucky straight bourbon. Per the label, this results in a whiskey that is 39% 17-year-old Kentucky straight bourbon and 61% 4-year-old corn whiskey and Indian bourbon.

As with all Orphan Barrel releases, internet talk, speculation and dismay at this release abounds. One interesting theory that, considering my experience with earlier releases, may have some legs, is that this whiskey was made in response to initial reactions to the bitter, oakiness of those extra-aged releases Orphan Barrel previously put out. True or not, I personally agree that those releases were very oaky and could perhaps benefit from being blended with a much younger whiskey.

Considering this is by far the least expensive release from Orphan Barrel, not to mention the highest-proof of their releases, I was more than happy to give this one a try. The nose is soft and mellow, with light corn notes, tobacco leaf and caramel. It's very inviting, despite the high alcohol content.

On the first sip, however, the burn was unavoidable, though not necessarily overwhelming. The up-front flavors of caramel and vanilla, along with baked cinnamon apples provided for a very sweet, very enjoyable pour, with no bitter tanins or dryness to it. The cinnamon, along with a black pepper spice on the back end, also provided a nice complement to the dulcet, up-front flavors. The impact of the corn whiskey is very noticeable. The corn notes are readily present, and it certainly bears the sweetness of a corn whiskey.

My initial impressions were that this is in my top three of the Orphan Barrel releases to date, probably top two. I really enjoyed it, and as I worked my way through this bottle (and I say "work" with my tongue firmly planted in my cheek), other flavors seemed to come out of hiding. I eventually noticed a distinct cherry flavor, though not the offensive, cough syrup kind, but the more natural cherry flavor. Some of the oak and char also began to come through, but managed to fit right in with the cinnamon and caramel.

This bottle was really enjoyable from beginning to end, and for anyone that can look past marketing gimmicks and labels, I definitely suggest giving it a try.