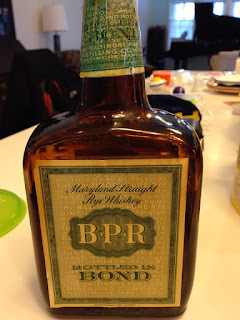 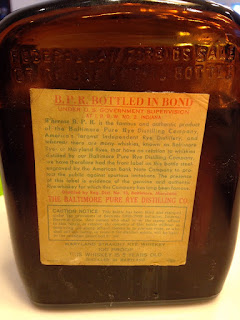 Every now and then an opportunity comes to me by virtue of this blog and my outward obsession with whiskey. A friend will let me know when he comes across something rare on a trip to Kentucky, or my local liquor store owner will make it a point to hold a special bottle back for me. Recently, though, it led to an opportunity to try a 65 year old rye whiskey from a distillery that closed up shop only shortly after this particular rye was bottled.

A good friend of mine was visiting his family when he sent me a text informing me that his father had found a bottle of Baltimore Pure Rye Bottled-In-Bond Maryland Straight Rye Whiskey from around 1951. Though it wasn't offered at that time, my buddy, without my prompting, made it a point to hassle his father to get a sample for me to try. A few months later he brought me a small jelly jar with a healthy sample.

Prior to tasting, though, I felt I needed to do my fair share of research, to know what it is I was about to taste. Unfortunately, though, there's not a whole lot of information available regarding the Baltimore Pure Rye Distillery.  The most comprehensive information I was able to find on another whiskey blog, EllenJaye.com. Though no sources are cited in the article, it provides a nice history of the distillery, including information regarding how the distillery marketed its rye, claiming it contains "Real RYE-E-RYE" referring to their 98% rye mashbill, and is made "in the old-fashioned Maryland way."

Unfortunately, the distillery closed in 1957, after which point Seagram's purchased the distillery and operated it for the next 30 or so years. Apparently, though, some bottles remain in the wild, and I was lucky enough to enjoy a pour of one.  So, to the juice itself!

The nose is very pleasant, giving off a wonderful sweet, pipe tobacco smell, including strong vanilla and honey notes. I was actually surprised at the sweet scent of the whiskey given that it's almost 100% rye. Certainly the rye spice was noticeable as well.

Despite its nose, though, the whiskey was not as sweet as I expected. It has all the earmarks of a high rye whiskey, the spiciness and cinnamon flavors you'd expect. It also came across as a very dry whiskey, with the wood tones taking front stage. It reminded me of a much older whiskey (though I don't really know its age).

What I noticed most, however, was a very prominent and distinct charcoal flavor, much like you notice in Jack Daniels. It piqued my curiosity as to how this whiskey was made and whether charcoal was used in the filtering process. Given the location of the distillery it wouldn't surprise me that it was, in fact, charcoal filtered, but I was never able to find an answer.

I took my time with this sample, knowing I wouldn't come across it again. Overall, I really enjoyed drinking this, though perhaps more for the nostalgia than the whiskey itself (which was very good--not great, but very good). I'm not treating this as an official review for the site and am not going to give a 60 year old sample a grade.  I'm not certain't there'd be much point in that. Rather, I just wanted to share an opportunity and an experience that happened to find me, one I'm certain never to experience again. Then again, I guess I never know what other surprises may lurk in the attics and basements of friends and their relatives!
Posted by Brian Zeeck at 4:58 PM