While on my ski trip to Park City, Utah, I knew I'd be remiss if I didn't make my way over to High West Distillery, a quick 25 minute drive away. The timing was critical, though, as we wanted to be sure to get a solid day of skiing in before heading out, so my buddy Dave scheduled a 3:00 tour, the last of the day. This turned out to be the best decision we could have made.

After a morning and good portion of the afternoon of skiing some fresh powder thanks to the heavy snowfall the night before, we cleaned ourselves up and headed out. After taking the highway for 20 minutes or so, you then exit and drive a few miles along essentially an access road just off the highway. That road eventually dead ends into Blue Sky Ranch. We checked in there and got our parking passes as well as a warning to go slowly up to the distillery due to the abundance of wildlife.

We then proceeded up a winding mountain road with incredibly beautiful views and, as warned, dozens of deer and elk just off the road. The trip there alone made the tour worth it. Even walking up to the distillery we couldn't help but notice that the patio right outside the visitor's center, built over a nice, picturesque stream, seemed to also perfectly frame the incredible view of the valley below.

We arrived and immediately began perusing the gift shop, chatting up the woman working there and our tour guide, and making our decisions as to what we were going to purchase after the tour. Finally, Jack, our tour guide, kicked off the tour and across the patio we went to the distillery. The tour was limited primarily to one large room where they house the stills (a combination pot still and column still) and the mash tuns and fermenters. As was explained to us, with the recent purchase by Constellation Brands, expansion is on the horizon, and the next time I return I can expect to see a lot more equipment.


We got to view all their equipment up close, got a very thorough explanation of the distillation process from grain to bottle. However, we didn't get a chance to see the storage area or go into the bottling area, only getting to see that area from a distance.

Following the scheduled tour, however, the goodness then began! We sat down for our tasting, and the three of us there all agreed on the reserve flight, consisting of pours of the Valley Tan, the 14-Year Light Whiskey, the Bourye Limited Sighting, Midwinter Night's Dram and the American Prairie Reserve. The three of us also agreed that we ranked each of the pours from best to worst (worst being a relative term) in reverse order. The American Prairie Reserve (which was not available for purchase) was outstanding!

While sitting at the bar, enjoying our flight, we got to talking with not only our bartender (with the unforgettable nickname of "Bucket") but also the two guys sitting at the end of the bar who eventually informed us that they are the blenders for High West--the guys putting the product into the barrels. As the bar began to close down, these two guys, Tui and Dylan, who had just told us what they had been doing for the day--filling rye blends that had been finished in vermouth barrels--asked us an interesting question: "Wanna go smell some barrels?" As odd as that question may seem in retrospect, it was nonetheless at the time met with an immediate, "Hell yes!" And so the second portion of our tour began.

Dylan and Tui brought us back to the bottling area, the area the tour only let us view but not enter, and started popping the bungs off the barrels sitting in the queue to be bottled. They then invited us to enjoy some free smells of the sweet, vermouth-y Yippee Ki-Yay! Already this was more of an experience than I had expected. As we got to talking about the different products that High West has produced, the recent finishes on the Double Rye! (some of which I've reviewed here) and new products coming down the pike, they then took us even further into the facility, showing us some of the more recently filled barrels, including a Syrah finished rye where you could just see where the wine had previously seeped through! We also got some free smells of a barrel of A Midwinter Night's Dram!

They then took us out of the building down the drive and into their warehouse, where their barrels are aging. Again, we got a sneak peak at some of the stuff that will eventually (hopefully) hit the shelves, including ryes aged in tequila barrels as well as Caribbean black rum barrels. We then went back up to the distillery and Dylan opened up one of the fermenters so that we could, again, enjoy some free smells of the fermenting beer (one of my favorite parts of any distillery tour).

Despite being the last tour of the day, and despite their having already worked their shift, Dylan and Tui spent another hour of their time giving us a personal and comprehensive tour, one which we spent in large part just shooting the shit about working for high west, filling barrels, the various high west products and our mutual enjoyment of whiskey in general. Despite that morning being the best skiing we had all trip, they made this easily the highlight of our trip!

Even without the "extra" tour, this distillery is well-worth the visit, from the enjoyable drive to the beautiful facility to the incredible views (we even watched a bald eagle fly across the valley) to the delicious whiskey, this was one of the more enjoyable tours I've experienced. The extra time that Tui and Dylan spent just to let us whiskey nerds in on more of the operation, however, made this an incredible experience, one I'm never going to forget. And, whether he knows it or not, Tui (who could play Ice-T in his biopic) is now my new best friend!

Below are just some barrel-porn pics for everybody: 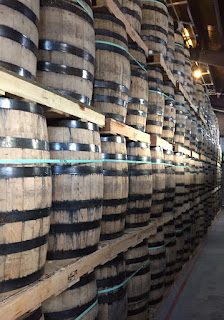 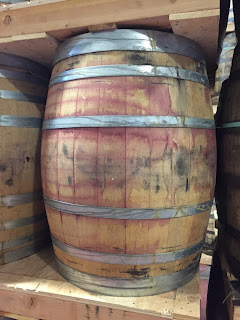