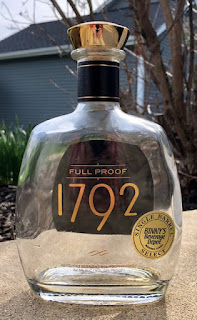 The more I have of these 1792 Full Proofs, the harder they are to pass up. Each and every one that I've had has been very good, if not great. They are always rich and bold in flavor and are, at the very least, well worth the price tag.  What's interesting about it is that, while people seem to be chasing certain store picks such that stores are running out of them in a matter of hours, these tend to remain pretty available. People make runs on Buffalo Trace single barrel selections, yet seem to ignore its cousin Barton.

But it's bottles such as this and the various Knob Creek private selections that I've had over the years that always bring back that necessary perspective for me. While I, too, love finding a new store pick of Eagle Rare or Blanton's, when those aren't available (which is pretty much all the time), there are still plenty of good store picks to whet my whistle.  This particular barrel proved to be no exception to the rule!

When I first cracked into this bottle, I got a TON of alcohol on the nose. I realize this is a high proof bourbon, but it was still more than I expected. However, after having the bottle open for only a couple days, that alcohol note faded away almost entirely.

Even on that first whiff, however, behind the strong alcohol note, was a nice combination of peanuts and caramel, reminding me of a turtle with a little less chocolate. I got slight bitter wood notes as well. Throughout there was also this odd, musty smell to it, like a damp basement. All in all, this had kind of a weird nose which at first really put me off.

I say at first, though, because as soon as I took a sip, I forgot all about the weird nose. I immediately noticed a delicious, rich and creamy caramel up front. This creaminess was supported by the nice, buttery texture of the bourbon. For something that had a lot of alcohol on the nose and a weird, musty smell to it, the flavor was completely opposite in as good of a was as possible. This was one of the smoothest 125 proof bourbons I've ever had.

The prominent caramel flavor was there on each and every pour from this bottle, and it probably earned the moniker "caramel bomb." While that caramel dominated, though, other flavors came through to complement that flavor, including some dark fruit flavors and a bready, pastry note which, combined with the sweetness from the caramel, reminded me of cinnamon raisin bread.

That cinnamon note carried over to provide a nice, spicy finish that worked really well with the sweetness up front to provide some nice balance. The finish seemed to linger for days and seemed to be even more rich than the front end. Some dark fruit notes seemed to come out of nowhere, with flavors of black cherry and blackberry, which added to the complexity and played so well with all the other flavors.

Again, the nose on this one was incredibly misleading. I've yet to get a dud from these Full Proof private selections, and when I opened it I wondered if this would be my first. But, from that first sip I knew I had something delicious and that the nose was just a big, fat liar.