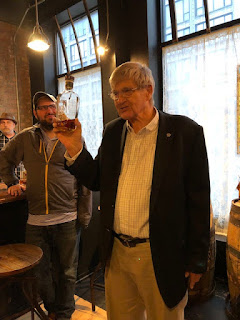 The other night I got to be a "lucky duck" -- at least that's what we were called in our confirmation e-mails.  I was one of only about 30 or so people who managed to score a ticket for a private tasting with Al Young at Warehouse Liquors in Chicago.  As many in the bourbon world are aware, Gene, the owner of Warehouse Liquors, is well-known and has a sort of cult following for his store picks. In conjunction with his most recent Four Roses selections, he put on this tasting with the one and only Al Young!

As my buddy and I walked into the room, a sort of bowling alley of a tasting room with place settings lined up on both sides, we immediately went straight to the front and parked ourselves right next to where Al was standing in hopes that that's where he'd remain throughout the night.

As people trickled into the room over the next twenty minutes or so, aside from the people who came up to introduce themselves, take pictures and shake his hand, we had pretty much a good ten minutes of one-on-one time with Al to just shoot the shit, talking with him about the charity event he attended the day before, his time in Lexington the past few days, and even a little bit about the bourbon he drinks.

Throughout the evening, we got to taste four different store picks that Gene had recently selected for Warehouse Liquors, in the following order:

Interestingly, we started with the highest proof one first -- the OESV.  I'm not sure if the order was arbitrary or not, but ultimately, of the four, this is the one that we went back to to try again, and it ended up being  my favorite. It seemed to lean more towards traditional bourbon notes than the others did, with lots of caramel, a great, creamy, buttery texture, and a long, kettle corn finish. I absolutely loved this one and a bottle came home with me that night. 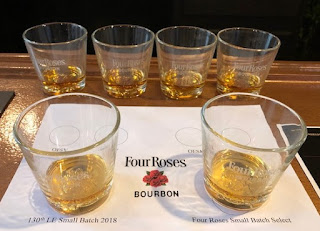 The OBSV was a short-barrel. I'm not sure how many bottles came from it, but it's my understanding it was very limited. While this was the one that sold out first, it ended up being my least favorite, as it had a significant astringent quality to it, making me reach for my bottle of water immediately. I really liked the OESK and the OBSQ as well, and both were tied for a close second for me.  The OESK was the most unique of the barrels, as I got a white wine, almost a pinot grigio note out of it. It sounds weird, and it's the first time that I've ever gotten such a note off a bourbon, but it worked really well with the vanilla and light anise flavors. The OBSQ leaned more towards softer wood and caramel notes, with a light orange zest to it. The fact of the matter is, if you get the opportunity to purchase any of these bottles, do so!

In addition to these store picks, we also got to taste the 130th Anniversary Small Batch, which was absolutely amazing (and my buddy and I may or may not have snuck a couple extra pours when people weren't looking) as well as the Small Batch Select, which isn't yet available in our market. While Al was there, at least in part, to talk up the new Four Roses product, he legitimately seemed very proud, touting the higher proof (104 proof) and that it is non-chill filtered. He seemed genuinely eager to get feedback from everyone in the room about their thoughts. While everyone really enjoyed it (myself included--it drinks much lower than its proof), the consensus was that he did it a disservice by having it follow the 130th.

Even despite getting to taste all this great bourbon, however, what made the night was Al himself.. I had never met Al before, and my immediate impression was that he is truly a man of the people. He was not there just on another stop to hawk his products. He genuinely enjoyed meeting people, answering their questions, discussing bourbon, telling stories (both personal and industry-related), signing copies of his book and giving his time to anyone that wanted it.

The highlight for me (other than his mention of a desire to eventually produce a Four Roses Rye--yay!) was hearing him tell stories about his home life, particularly about how proud his wife was when Four Roses released a bourbon named after him.  It was that or his double-take when asked, when doing tastings, whether he spits or swallows. Al is a great storyteller and has a wonderful (and even at times crass) sense of humor.

I had never met Al Young before, and within minutes of meeting him, I wished I had met him sooner. As I told him at the end of the night, I've met a handful of industry icons, leaders and what have you, and meeting Jimmy Russel always stuck with me, because he was genuine. He truly loved interacting with his customers and meeting people, and it came through. Al Young is right there as well. He is as friendly and inviting, and more importantly, as genuine as they come! This was easily one of the best tastings I've ever been a part of. 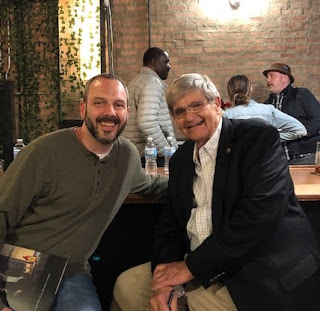