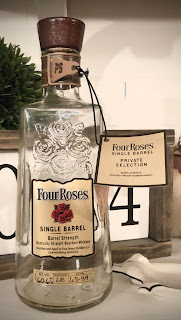 A while back I attended a whiskey tasting at Warehouse Liquors in Chicago. It happened to be a tasting with Al Young, wherein we got to taste the 130 Anniversary Small Batch Limited Edition, the new Small Batch Select, and four new (at that time) Warehouse Liquors private selection single barrel picks. Needless to say, it was an incredible time, and among the private picks that we tasted that night, this was my favorite.

Before writing this blog, I looked back at my notes from that night to compare to my notes I took as I sipped my way through this bottle, months later.  At the time of the tasting, these were my notes:

It seemed to lean more towards traditional bourbon notes than the others did, with lots of caramel, a great, creamy, buttery texture, and a long, kettle corn finish. I absolutely loved this one and a bottle came home with me that night.


So, now that I got the chance to enjoy a full bottle before writing a review, here's what my notes reflect. The nose was all brown sugar and dark cherry, a great combination. It also had a bit of a chalkiness to the nose. I know that sounds more like a texture than an aroma, but it had that fourth grade classroom smell to it. There was also a definite cinnamon spice to it as well that tickled the nostrils a bit.

As to the flavor, brown sugar and cinnamon predominated. It also had a certain woody bitterness, combining into a sort of candied cinnamon stick flavor. Though the brown sugar was there, I did wish it were just a touch sweeter.

I also got a certain bitter bite, like an orange pith note. This, along with the cinnamon and wood, seemed to lead to a bit of an astringency quality. As I look back at my earlier notes, this was something I didn't notice then.

However, despite that astringency quality, there was still a lot to love about this bourbon. It also had notes of honey and graham cracker, giving it a sort of flaky apple pie crust type flavor. Any sweetness that came through, however, was always tempered. At times there was almost a sawdust note to it (perhaps that chalky note I got on the nose).

Ultimately, though, the wood and cinnamon were prominent throughout. As I made notes with each pour I tasted, I never got the creamy, buttery texture, nor did I get that long, kettle corn finish. In fact, I didn't love it nearly as much as I did that first time. Perhaps it was the atmosphere that contributed. In the end, this was still a really good, complex pour. With a little extra sweetness and a little less of that astringent quality, it would have been a great pour.