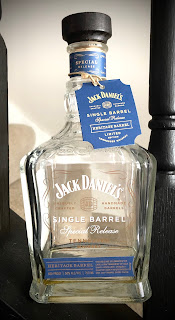 Though I used to consider myself not a fan of Jack Daniel's, more and more I'm finding that I really like what they're putting out.  Perhaps not Old No. 7, but I have yet to find a single barrel that I didn't enjoy. That being said, it's still been quite some time since I've grabbed a Jack Daniel's product off the shelf.

But then last year, their release of their Heritage Barrel single barrel whiskey got all sorts of buzz on social media, blogs and in other reviews. For the most part, I was seeing nothing but love for this product. However, by that time it was gone from the shelves. So, when this year's release hit, and I found one looking back at me from the shelf, FOMO got the best of me and I had to have it.

For what it's worth, when I write these reviews, it's after I've finished the bottle. And, while that remains the case here, in actuality, the bottle fell off the top of my fridge shortly after opening it, breaking the cork. So, I ended up having to decant the remainder, which was most of the bottle. That being said, this bottle was (spoiler alert) absolutely delicious, and it didn't remain in that decanter for very long.

The nose was interestingly feint. I really had to shove my nose into my Glencairn in order to get the aromas that were there, but when I did, I got a somewhat odd combination of toffee and black pepper. It was kind of like a spiced Heath bar. I also got notes of cinnamon sugar graham crackers. I realize that it's very specific, but there used to be a cinnamon sugar flavor of Teddy Grahams (I think it came in a red box), and that's what I was reminded of here. Apparently this nose evinced lots of callbacks to food memories for me.

As to flavor, the first thing I noticed was a heavy corn flavor. But, it wasn't hot in any way, nor did it come across as a corn flavor the likes you might get in a young whiskey. Rather, it was kind of like a sweet creamed corn, soft on the palate and with no harshness whatsoever.  That flavor seemed to match the texture perfectly, too, as it had a nice viscosity that almost came across as pillowy.

In addition to that sweet creamed corn note, there was a peach note that blended with what was kind of a yogurt note. I'm not sure how best to describe it, but those two flavors provided a certain tanginess and added some nice, fruity and even earthy complexity balanced out by sweet vanilla flavor throughout.  Notably, I did not get that traditional Jack Daniel's banana note, despite watching out for it.

What I loved most about this whiskey, though, was the finish. After each swallow, I was left with this great marshmallow and nougat flavor that was absolutely amazing. There was even a bit of a milk chocolate note to the finish as well, and all I could think of was 3 Musketeers bars. Yes, that's the third reference to candy and/or snacks in this review, but that's what I was getting and I thought it was incredible. That's what kept me going back pour after pour, and it's that finish that made sure this whiskey didn't stay in that decanter very long. I'm glad my FOMO got the best of me!