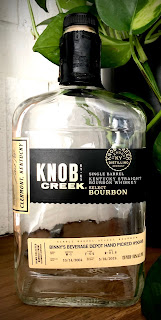 It's been a couple weeks since I've written a review, but in all fairness, that time included a ski trip in which I consumed multiple bottles of whiskey, but just lacked the wherewithal to actually take notes or write a review on any of them. I'll just say that it was a mixed bag of terrible to amazing over the last week.

However, when I got back from the trip, I made it a point to work on getting to the bottom of this bottle for two reasons. First, it was a really good bottle of bourbon, one that fit my mood no matter what. And second, I seem to have been stockpiling these older Knob Creek picks, and I felt I needed to begin reducing that pile so I can make room for any such future purchases.  I figure that's as good of an excuse as any to drink good bourbon...and, in fact, better than most!

The nose on this particular barrel was actually pretty mellow. It had sweet but soft caramel and vanilla notes. It also had a sort of a cola note as well.  What stuck out to me, though, and what I couldn't un-smell once I noticed it, was an Oreo cookie smell, with that semi-sweet chocolate cookie and vanilla frosting. It was good but weird in a bourbon.  On later pours, however, that cola smell seemed to get stronger and stronger, like I just poured a glass of Coke.

The flavor, for the most part, seemed to fit the nose. Right away I noticed root beer and vanilla, reminding me of sitting at A&W with the kids, stealthily stealing scoops of ice cream from their floats.  That's an admittedly very fluffy way of saying it was really good.

Despite the age, I never really got much wood on the palate. Yet, there was still this sort of harshness to the flavor. It's hard to describe, but it was kind of like those bitter edges you notice with burnt sugar. It's sweet but bitter at the same time, and that bitter takes on a certain harshness.  I did get a decent amount of amaretto as well, which when married with the vanilla notes I was getting, resulted in a very rich tasting bourbon.

The finish was probably the best part of this bourbon. It was long and creamy, almost buttery, and created this nice, silky coating. The flavor carried all of those vanilla, caramel and burnt sugar notes, which, along with that buttery texture, reminded me of a rich creme brulee.  I fount myself savoring that flavor on more than one occasion.

If it weren't for that burnt sugar harshness, I would have absolutely loved this bourbon. Even with it, though, there was so much else that was great that it didn't matter, and it was still an excellent pour that had me constantly going back to the well.