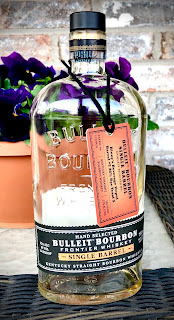 It seems every product these days is getting the private barrel treatment. There is certainly no dearth of private picks to choose from at all of my usual liquor store haunts. What's available, however, seems to depend upon the distillery, though, as Buffalo Trace products and Four Roses single barrels seem to sell themselves.

However, a while back I recalled reading announcements from MGP and Bulleit, both only a couple days apart, that they would be starting a private barrel program, and as a fan of both, I was excited for both.  Binny's finally got a few different bottlings in earlier this year, and although the particular staff member I spoke with hadn't tried any, he related that another customer bought a bottle of this "Barrel #2" and loved it so much that he came back to the store to buy two more. So, that's the one I went with.

The nose is relatively soft and a little feint, but nonetheless good. It had a decent amount of cinnamon, as well as a light and inoffensive oakiness. I also got a light smokiness on the nose as well. Those notes were sweetened up a bit by a nice honey note, as well as notes of maraschino cherry and dark chocolate. At times I got a nice vanilla or sweet creme note, which I wished were a bit more prominent.

I found the flavor to be very amaretto and allspice forward. It had that rich, tangy quality that I get from those flavors. At times it reminded me of cherry pie.  There was also a decent amount of cinnamon spice, which I expected given the high-rye recipe.

As I worked my way through, the allspice notes seemed to dominate. I also got a nougat note that was really good, perhaps a transformation or development from the pie crust flavors I was getting. However, I also started getting something a bit more earthy, more of an umami flavor.

At first I couldn't quite place that umami note, but towards the end of the bottle, I found that that note, mixed with the allspice note, reminded me a lot of pumpkin pie. It had that sweet, spice, and yet earthy note that I love in a good pumpkin pie. All I needed was the whipped cream!

The whiskey had a nice, buttery viscosity, and I think that went very well with the flavors I was getting. I thoroughly enjoyed this whiskey in multiple ways, whether neat, over ice or even in a cocktail (it made for great whiskey sours). It held up every way. While it didn't blow me away, it was nonetheless a very good pick by the Binny's staff.