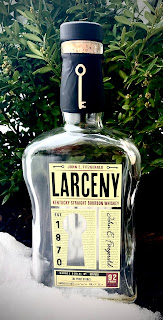 You know what's a nice surprise?  Getting home from wherever you've been (in this case I had to do a quick run to the office to grab some much needed supplies for working from home) and noticing that there's a new bottle on top of your fridge among the most recently poured bottles. Nobody told me this bottle was coming, nor did I immediately know where it came from.

I came to learn, though, that my father-in-law had bought a bottle himself (he was very pleased with the price point), really loved it, so he went back and grabbed one for me! Hooray for free whiskey! I've now had a few different picks from the Pride Stores, a liquor store in a strip mall next to a Pride gas station. I'm not sure their process for getting picks, whether they're being sent samples or simply provided whatever the distillery chooses. However, what I've had has been fairly solid.

This particular bottle proved to be no different. The nose was sweet and soft, like the smell of honey wheat bread. I also got a bit of sweet corn as well as a hint of molasses or maple syrup. It was certainly grain forward but not doubt had a bit of a sweet aroma.

That soft sweetness also carried over to the flavor. I got a kind of sweet but creamy or fatty note, almost like a honey butter flavor. This went incredibly well with the honey wheat bread note that also carried over from the nose.

I also got a lot of vanilla that for some reason I didn't get on the nose. It kind of underscored every other flavor. It added a sweet note, which  mixed with the other flavors I was getting to develop almost a butterscotch candy flavor. I also got cornbread notes at time, and those too were with that hit of vanilla as well, which was a bit of an odd combination.

Despite the lower proof, this bourbon had a nice, oily mouthfeel, which provided for a long, drawn out finish with butterscotch and caramel flavors seeming to linger for quite a while. In fact, the finish was what I enjoyed the most about this bottle, as it was just as good as any finish I've noticed in far more expensive and far higher proofed bourbons.

This was really a present surprise, particularly given where it came from, the proof, and of course the incredibly affordable price.