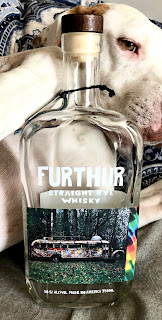 During my days as an English major in college, I developed an affinity for the writing of Ken Kesey. Of course, I read One Flew Over the Cuckoo’s Nest in high school and absolutely loathed Nurse Ratched in the Jack Nicholson film. I then read Sometimes a Great Notion, and it is still today my favorite book I’ve ever read.

As a fan, I then read up on Ken Kesey, his involvement in the counterculture of the 1960’s, and I read Tom Wolfe’s The Electric Kool-Aid Acid Test, which follows Ken Kesey and the Merry Pranksters as they made their way across the country in a crazy-looking bus called “Further.” It was the picture of that bus that immediately caught my eye as I did my usual perusal of the whiskey shelves, and I immediately grabbed the bottle, knowing I had to have it. Even better, per the label on the back, a portion of the proceeds from the sales of this bottle are going towards the restoration project, to bring Further back to life. I couldn’t have been more on board.

Now, going in I knew that this whiskey was young, and I knew there was a good chance I might not like it. And the nose kind of matched my predisposition. It came across as young and corny. It gave off the over-ripe apple note that I always seem to get in under-aged whiskeys.  It did have notes of cinnamon and clove, however, as well as a nice sweetness to go along with the spice. But that sour note that I associate with young whiskeys just seemed to stick around.

The flavor, however, was better than expected. While it had those young notes, particularly the corn and over-ripe apple flavors, they seemed to take more of a backseat. In fact, the apple came across as something more interesting, a bit like a crisp granny apple. I even got white grape notes at times.

It also had a heavy dose of brown sugar that went well with those apple notes. Along with that was something odd, though, kind of like a corn chip note. In fact, it reminded me of Bugles. This was definitely a first for me as far as whiskey notes are concerned. Behind all of that, and prominent on the finish, were healthy notes of pine and cinnamon. The cinnamon seemed to stick around for quite a while, giving that kind of lingering red hots flavor.

The final few pours seemed to really showcase the granny smith apple flavor, which, again, I appreciated for not being that over-ripe apple flavor that turns me off. The pine and cinnamon seemed to really come forward as well after this was open a while. All in all, it was a decent whiskey, and for the price, not to mention the cause, certainly worth buying. In fact, I shared the last few pours with my neighbor who absolutely loved it.