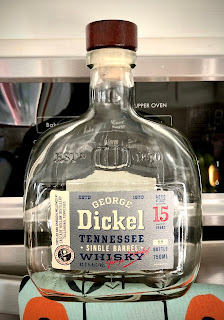 VITALS:
- $70
- 84.4 Proof
- 15 years
- Tennessee
I really haven't found a Dickel product that I've loved.  I've had some here and there that I've enjoyed, but far from anything that has blown me away or knocked my socks off or whatever other such colloquial phrases. But, I keep trying them, whether it's craft whisky sourced from Dickel, Dickel whisky finished in wine barrels, or single barrel offerings.
Such was the case with this bottle. I wasn't aware that it was going to be released, but when I spotted it on the shelf, a great internal conflict began in my mind. I'm generally not a big fan of Dickel, yet here was a 15 year single barrel product at a relatively accessible price. Certainly the proof could be a lot higher, but in older whiskies, lower proof can certainly be alright as far as I'm concerned. The wood bitterness tends to be a bit less pronounced. And so I brought home another bottle of Dickel whisky.
The nose smelled like it had a bit of age to it. I got something woody, but it was a lighter woody note, like the smell of your garage after using a table saw (so, sawdust, I guess--so much for brevity).  I also got something sweet and earthy all at once, like tobacco leaf, or even tea leaves. There was something crackery, which, with the sweetness, reminded me of animal crackers. And behind all this was kind of a dried or powdered strawberry note. It had a funky aroma overall, but not a bad one.
On my first pour, I was admittedly looking for that grape flavored vitamin note. I perhaps have some PTSD from the Dickel Bottled in Bond.  And on the first few pours, I was pleasantly surprised to only notice the vitamin note just a little bit. Luckily, there were a lot of other flavors bouncing around on my tongue.
It had a familiar sweet pastry-like quality. It took me a while to try to pin down exactly what type of pastry I was tasting, but ultimately I decided it was like a funnel cake with a dusting of powdered sugar. I also got the dried strawberry note that I got on the nose, and these flavors, as you might expect, all worked really well together.
Other notes came through as well, all on the dessert end of the spectrum. I got additional notes of blackberry and even banana. I also got brown sugar as well as a bit of a cake note, kind of like pancakes.  Interestingly, I even got somewhat of a rum note, which really complemented the banana and brown sugar flavors.
Unfortunately, about halfway through the bottle I noticed that the grape vitamin note seemed to becoming more and more prominent. Perhaps it was the whisky opening up. Perhaps it was just me being more in tune to it. But, as with the Bottled in Bond, I had a really hard time getting past it. It wasn't nearly as prominent as it was in the Bottled in Bond, and it even leaned towards a cherry vitamin note (which isn't really better), but it was there enough that I just had a hard time enjoying this as much as I wanted to.
I doubt that I'll swear off Dickel products altogether, but they really just aren't for me for the most part, and I don't see myself dropping any substantial amounts of money on future products. It's unfortunate, because they do release well-aged products at decent prices, and so many people love their whisky. I just can't count myself among them.
Grade: C+
Posted by Brian Zeeck at 4:00 PM