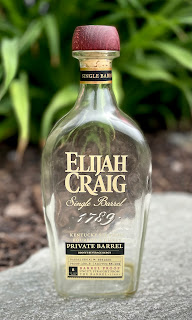 These barrel strength private barrel seemed to hit the market somewhat hard and fast when the program first started, it seemed that all of them were below the standard 12 years that you get from the tri-annual release of the regular Elijah Craig Barrel Strength. In fact, most seem to be 9 or 10 years, with a 11 here and there.

However, this one came out at only 8 years old. Typically, where there are older offerings available, as was the case with this release, it's going to be a no-brainer to get the older bottling. However, in this case, I had already managed to grab two other Elijah Craig Barrel Proof picks, at 10 years and 11 years respectively. So, I was intrigued as to what it was about the younger 8-year pick that the "pickers" loved about this barrel enough to want to bottle it. While it's four years younger than the regular stuff, it's still in that sweet spot of bourbon age, even if towards the lower end.
The nose was everything I've come to expect from Elijah Craig. It was full of cinnamon and brown sugar sweetness. However, it also had a woody, earthy tone. I got a decent amount of pecan, as well as a light oak note. However, neither flavor seemed to bring in the type of bitterness that is so often associated with them. Rather it was more of a candied pecan note, with hints of oak on top.
The flavor was very much in-step with the aroma, as it led with oak and cinnamon. Here, though, the oak was a bit more prominent, which I wouldn't have expected out of a younger bottling. It actually tasted more aged than it was.  There was also a distinct layer of unsweetened vanilla right up front, which stayed through the back end.
The finish was interesting, as it made me think of an Old Fashioned, but without the sweetness. I definitely got an orange bitters type note, almost like orange peel but not as bright. There was also a walnut liqueur note, almost as if it were an Old Fashioned with an interesting twist, though again lacking that sweetness. The brown sugar I got on the nose seemed to disappear on the flavor and on the finish.
I happen to enjoy an oak-forward bourbon, so long as it's not overdone. In fact, that's what I love about Elijah Craig 18 Year, is it embraces that profile without overdoing it. This isn't quite as oak-forward as Elijah Craig 18 Year, but it certainly had an oak-forward profile that was tasty rather than offensive. It may have been a bit lacking in complexity, but it was still bold in flavor and gave me everything I wanted.  It certainly held up with any of the older barrels!
Grade: B+
Posted by Brian Zeeck at 4:00 PM