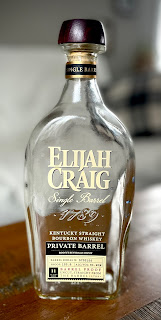 It's been a while since I've finished one of these off. For a while there Binny's was getting a quite a few of these in, and I was grabbing pretty much every one I could get my hands on. So far it's been my experience that age ain't nothing but a number, and whether these have been 8 years old or 11 years old, they've all been excellent and on par with the normal barrel proof releases.

This, however, was the last of the store picks that I had grabbed, though I have plenty of the regular Barrel Proof releases in reserve, so I'm good. But it is still fun to pick up these store picks that might have something different or unique in their flavor profile, something that made them stand out to the taster.

The nose told me that this was going to be just what I've come to want, and even expect, from Elijah Craig Barrel Proofs. It was cherry and oak forward, though it didn't have the bitterness that sometimes comes with the oak note. It also gave notes of cinnamon and brown sugar, and even had a bit of a graham cracker note. It smelled like a rich baked dessert and I couldn't wait to dive in.

The cherry note didn't hit me up front as I had expected. Rather, it was the cinnamon that really came through, along with the oak note. Again, the bitterness from the oak didn't come through, luckily. Just that oak flavor, making this seem like a much older bourbon than it was.

It did have that brown sugar sweetness that I was getting on the nose, as well as a bit of a pie crust note. Between all of these flavors, I definitely got a bit of a pecan pie vibe, and I absolutely dug it.

On the finish the cherry came through, but it wasn't that brighter, fresh cherry note I got on the nose. Rather, it was more of a cooked cherry note, with added spices like cinnamon and clove. It had the brown sugar sweetness as well. While it didn't seem to last as long as I would have liked, the flavor punch on the finish was my favorite part about this bourbon. Here's to grabbing more of these as they come in!!