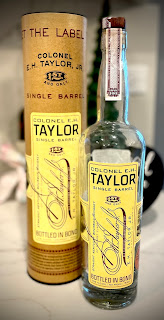 VITALS:
- $70
- 100 Proof
- NAS
- Barrel #027
- Kentucky
I've managed to pick up a handful of these E.H. Taylor single barrel store picks. And yet, for whatever reason, I never got around to opening any of them until just recently. This was one of the bottles I brought with me on my recent trip to Kentucky, and once I popped it open I realized what a folly it was to not have done so sooner.
These tend to be few and far between, even at the bigger stores. On top of that, the demand is a bit nuts. So they're just not easy to come by, and perhaps that's why I waited. That said, it won't be long at all until I open up the next one on my shelf.
The nose was very caramel forward, with a rich sweetness that reminded me of Werther's candy. There was a light oak note to it, but lacking any bitterness. It also had notes of chocolate and brown sugar, and there was something there that reminded me of blondies. I also got hints of orange peel that gave off a slight Old Fashioned note.
What I loved about this bourbon, from the first sip, is that I absolutely got that blondies note right up front. Perhaps that's not relatable, but for those not in the know, it's like a brownie, but with butterscotch and brown sugar instead of chocolate. One of my favorite desserts, and this bourbon nailed it.
I also got other backing spices, including a lightly spicy cinnamon note, and that chocolate note I got from the nose appeared as well, though not as strong. The light oak note from the nose was also present on the palate, but without any associated bitterness. It seemed to fit right in to keep this from leaning too sweet.
The finish was rich but only lightly sweet, which was a nice departure at the end. There I was left with notes of dark chocolate and fig or raisin, and just the slightest tingle of cinnamon spice. It was a great way to finish off a great sip.
I was a big fan of this bottle, and once it was opened it wasn't long for this world. I can't wait to crack into another of these, and I can only hope it's as good as this one was.
Grade: A
Posted by Brian Zeeck at 4:00 PM