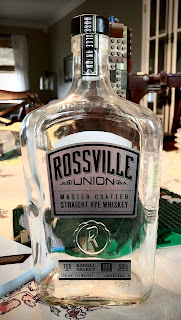 I've been wanting to try the Rossville Union products for quite some time now. After all, it's MGP's own rye whiskey, as opposed to being bottled under someone else's label. For whatever reason, though, whether that be that I always seemed to find other bottles I wanted to try first or the fact that I just hadn't heard much about this whiskey one way or the other, I never grabbed one off the shelf.

When Warehouse Liquors in Chicago got a private pick of their 100 proof rye in, though, I knew now was the time. Not only do I get to finally try the Rossville Union Rye, but I got to try one that was selected by Gene at Warehouse Liquors, whose palate I've come to trust.

The nose on this one, not unexpectedly, was all cinnamon and brown sugar. It smelled like an MGP rye, and the cinnamon spice really seemed to tickle my nose. It wasn't a very strong nose, however, and I found myself working to pull the different aromas. Once  I got past that spice, I got other notes, like milk chocolate, and even a chocolate chip cookie note. Though the nose was soft, it was very delicious smelling.

The flavor was sweet and not as spicy as I would have wanted, or even as I would have expected given the nose. I got a lot of brown sugar and maple syrup. It reminded me a lot of pancakes, as it also had that certain semi-sweet cake flavor to it.

As it settled on my tongue and lingered in the back of my throat, I got some molasses flavors, as well as a bit more sweetness that reminded me of oatmeal cookies (I seem to go to cookie notes a lot when drinking whiskey -- I just can't help it).

The finish was where this was probably the most interesting. The whiskey had a nice, silky texture that seemed to leave a light and soft coating of flavor after each sip. On the finish I was getting notes of orange and amaretto. It reminded me of a less sweet amaretto sunrise, if you've ever had that cocktail (I think I had it at a Mother's Day brunch once). That sweet, citrus note was even tempered a bit by a peanut note.

As mentioned above, though, I found myself looking for the spice in this bottle and never really getting it. It had a lot going on, which was all good, but it seemed to lack what I like most in MGP ryes. Perhaps it's just this pick. I think I might at some point grab a bottle of the cask strength Rossville Union rye just for confirmation.