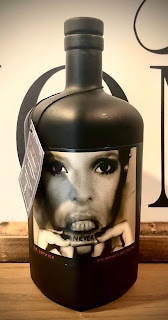 Dave Phinney is certainly well-known in the wine world. I'm not even close to being any sort of a wine connoisseur, but even I know him as the guy behind The Prisoner wine and 8 Years in the Desert. Just a couple ago he started his Savage & Cooke distillery, where he's been distilling, aging and finishing whiskey in what I can only assume are his own wine barrels.

What stands out with these offerings, however, is the bottle. These opaque, all-black bottles are labeled with a black and white photo and very little text. The label (along with the neck-tag) does offer some transparency, though, telling me that this is a 3 year rye out of Tennessee that was finished in Grenache wine barrels for an unspecified period of time. The black and white photo, though, is what has made me pause on multiple occasions, certainly curious about the liquid inside this bottle with the picture of a woman showing off her lip tattoo plastered on the front. When I found a sale price of $30, I finally pulled that trigger.

As would be expected, the nose was very fruit forward. I got a lot of sweet plum and raisin, nice dark fruits. I also got something citrus as well, like a touch of fresh orange. The nose was pungent, and even from a couple feet away I could get notes of bright raspberry and vanilla cutting through those other, more rich aromas. It certainly had a lot going on, though it seemed to be more from the barrel finish than from the whiskey itself.

As for the flavor, it certainly came across as sweet and fruity, though not necessarily overly sweet. The flavors from the Grenache barrel permeated, with a lot of brighter and lighter flavors, including white grape and raspberry.  On later pours I got a sweet, almost candied strawberry flavor. It came across as a very fresh and crisp sweetness.

I really had to focus in order to find the flavors imparted by the rye itself. I did get a certain nutty note, but on the sweeter side, like cashew. I also got a layer of vanilla, but it certainly was a thin layer. Flavors of granola also came through, which I'd attribute to the whiskey over the wine barrel, though I could certainly be wrong in that.

Unfortunately, for someone who really likes ryes, the rye characteristics didn't really come through. While it was full of bright, fresh flavors that I really enjoyed, I feel like I would have enjoyed this much more if the rye itself took more of a center stage. It lacked the spice and vanilla and other notes that I had really hoped to find. That being said, for the price, I certainly had no regrets. While it didn't do what I'd hoped it'd do as a rye, it was still very enjoyable for what it was.