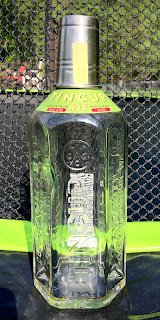 When I find myself traveling and staying in a hotel for the evening, I frequently hit up the closest liquor store, hoping to find something unique, local or just something I can't normally get back home. A few months back we took the kids to St. Louis, to do the Arch and all that touristy stuff. I made my obligatory side trip to the local store and just didn't find anything that really moved the needle.

However, there on the bottom shelf was Tincup rye. It wasn't a special or limited bottling, and it's certainly available in my area. But, it had just been released and I had yet to see it, so for under $30, it became my pour for that evening.  I figured that although it is young, it's at least MGP rye so it shouldn't kill me, right?  I've never been big on Tincup whiskey, but I was willing to take a chance on this.

On the nose I get a healthy amount of cinnamon and sweet vanilla, like vanilla frosting. There's also a slight citrus note, kind of like lemon zest. It also had a bright minty aroma to it as well, kind of like spearmint. Oddly, I also got some rich, dessert notes too, like dark chocolate covered cherries. It was quite the cacophony of smells, ranging from light and bright to dark and rich.

While the nose had a whole lot going on, unfortunately the flavor didn't exactly follow suit. It certainly tasted young and grain forward. It did have a lot of pine and cinnamon notes, though they weren't as rounded as I'd like, but rather seemed to have sharper, jagged edges.

It did have a light, vanilla sweetness on the front end, in line with the vanilla frosting note that I got on the nose. This seemed to translate into a sugar cookie note from time to time as well. The vanilla with the pine seemed to really work well, and was one of the more redeeming qualities of this whiskey.

After I had the bottle open for a while, the young quality seemed to dissipate a bit, though not completely. as a result, the sharp edges seemed to soften a bit, and rather than the pine, cinnamon and vanilla, and even mint from time to time, clashing with each other, they seemed to mix together better. I also got a sweet bread note in later pours, with wheat and corn grains coming forward as well as a bit of a honey note.

One odd thing I noticed was on the finish, though, where I got a certain vegetal flavor, almost like green pepper. Between that odd flavor on the finish, the overall thin texture of the whiskey, and the flavors that I typically attribute to young whiskies throughout, this just ended up being a whiskey that I kept wanting to find enjoyable but had too many reminders of why I found that hard to do.