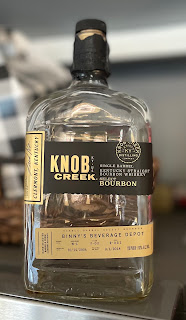 VITALS:
- $40
- 120 Proof
- 13 years, 11 months
- Kentucky
For a while it seemed like well-aged store picks of Knob Creek were flooding into stores. Not too long ago Binny's got a waive of 13-15 year Knob Creek picks, and seemingly only months later they got a second wave.  I grabbed a couple bottles from each wave, primarily of some of the oldest stuff. But, unfortunately, I only have one bottle left after finishing this one off.
Whether or not we see much more 12+ year Knob Creek store picks remains to be seen, but the outlook is doubtful. After all, Jim Beam has figured out that they can package a watered down version of the same product and sell it as a 12 year bourbon for an even higher price, or, better yet, a 15 year bourbon marked at a premium. So, I'm sure I'll be hesitant to crack open that last bottle that I've got squirreled away. But, if it's anywhere near as good as this bottle was, perhaps that time will come sooner than I realize.
The nose was surprisingly softer than expected.  My experience with other Knob Creek picks is that they've been pretty punchy and bold. Not so with this one. Rather, it came across like buttery maple syrup. It did have a decent amount of oak to it, and it also had that Jim Beam nutty quality, kind of like pecans. The smell reminded me in a way of pecan pie.
The flavor, though, was heavy on the toffee.  It was all dark, rich caramel notes, with a touch of bitter wood notes to help balance it out. I did get some of the maple syrup that I had gotten on the nose, and at times I swear I was tasting pancakes with maple syrup.
It had some other, more earthy notes going on as well. I got a hint of rye bread that I thought was interesting. It also had a definite peanut and amaretto thing going on. They worked really well with the toffee notes, though, to provide this sweet but rich and almost tangy flavor.
This had a lot of heat to it, but it seemed to fade quickly on the tongue to allow all these flavors to come through. And by the finish, I was getting very little alcohol burn, which allowed flavors of orange peel and maple syrup to remain behind on what was a very long finish. I had a smoked maple old fashioned once, and the finish on this bourbon reminded me of that.
This is a bourbon that wanted to be sweet, but the age, the robustness of it, as well as the more earthy tones wouldn't allow it to be a "sweet" whiskey. While it had its sweet components, that sweetness was well balanced. This bourbon had a ton of flavor, and I actually surprised myself with how quickly I finished this bottle. Once I opened it I had a hard time picking anything else to drink.
Grade: A
Posted by Brian Zeeck at 5:00 PM