One Eight Distilling Untitled Whiskey No. 13 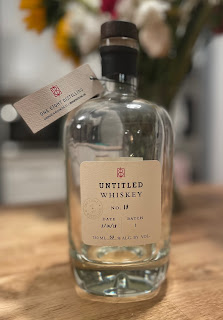 VITALS:
- $80
- 106 Proof
- 10 Years
- Batch 1
- Washington D.C.
I'll admit that I knew very little about One Eight Distilling out of Washington D.C. before purchasing this bottle. In fact, I know very little about them now. But I took notice when I saw their Untitled Whiskey Nos. 11 and 13 suddenly appearing on my local liquor store shelves. The bottle and label designs are simple, and the finishes sounded great. But that price for an unknown turned me away.
Then I started not only seeing their whiskeys everywhere on Facebook, including single barrel picks that people were going nuts for. So I reconsidered, and I ultimately broke down and bought a bottle of Untitled No. 13. It was the neck label that sold me on this particular one:

"For Untitled Whiskey No. 13, we rested 10-year old high rye bourbon in a combination of Cognac, Spanish brandy and Oloroso, Amontillado and Pedro Ximenez sherries."

It certainly had a lot going on, and the description reminded me a lot of the Jos. Magnus products. But, this one was not only age-stated at a healthy 10 years, but it was a bit cheaper than the Magnus blends. So I gave it a shot.
The nose on this thing was crazy full and rich. I got a healthy amount of dark cherry and chocolate, and even some blackberry. It had a brandy-like richness of baked pear and apple as well. It also had a rich read wine note, like a pinot noir. It did have a bit of a brightness to it, kind of like raspberry, but those dark, rich fruit notes really dominated here.
Of course the flavor followed suit. The wine barrel finish seemed to dominate immediately up front, as I got a lot of the full-bodied red wine flavors. I got a lot of that blackberry and dark cherry as well. It didn't come across as super sweet or anything, just full of flavor.
Those rich (I'm using that word a lot here, I realize), dark fruit notes were accompanied by dark chocolate and walnut notes. I also got some notes of raisin and plum that worked really well with everything else going on. There was also a bit of brown sugar to add just a bit of sweetness.
On the finish it had just a bit of tanginess to it. I liked it to amaretto liqueur. It's hard to put my finger on, but there was just something  lightly bitter while at the same time sweet that lingered on my tongue. It also left behind those notes of dark chocolate and walnut, giving it a very dessert-like finish.
What I didn't get, however, was the high-rye bourbon notes that I wanted. I didn't find any of that spice from the rye content that I was expecting. I also didn't get many of the more traditional bourbon notes, like caramel and vanilla. Unfortunately, while I bought the bottle in part because it started with a 10-year high rye bourbon, the bourbon ended up being almost completely masked by everything else going on. While it was still delicious, I wanted the bourbon itself to take more of a lead role here.
Grade: B
Posted by Brian Zeeck at 5:00 PM