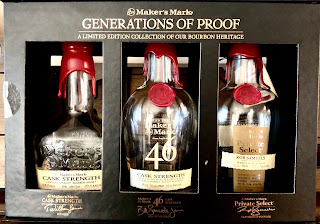 About a year and a half ago Maker's Mark released this three bottle Generations of Proof set, which, as I understand it, was available only at Costco. This "limited edition collection of our bourbon heritage" pays tribute to the Samuels lineage behind the Maker's Mark Brand. The set includes three 375 ml bottles, all at cask strength, and all showcasing Maker's Mark's most known products. The Maker's Mark Cask strength is in tribute to T. William Samuels, Maker's Mark's founder. The Maker's Mark 46 Cask Strength is in tribute to his son, Bill Samuels, Jr., and the Maker's Mark Private Select is in tribute to grandson Rob Samuels.
When I saw these start showing up on various social media, it was added as a staple to our household Costco shopping list. My wife knew, whenever she was there, to look for this set, and of course I made it a point to seek it out whenever I made a Costco run as well. I was disappointed on so many trips to that store having not found any, and then one day my wife and my son came back from running errands with box in hand! I had a lot of fun with this, of course doing a couple side-by-side tastings, and then eventually finishing off each bottle one-by-one. I had thought about doing individual reviews, but I figured one post should cover it.

Maker's Mark Cask Strength Kentucky Straight Bourbon
- 108.8 Proof
I've always been a fan of Maker's Mark Cask Strength since it was first released. While I wouldn't call it my "go-to" bottle (I don't really have one), it is certainly one that I'd push others toward. It's a very good bourbon bottled at cask strength, at a reasonable price, and is readily available. On the nose I got baked goods or pastry notes. It was like a bear claw with baked peaches and cinnamon. I even got a bit of a hazelnut note. I really loved the nose on this one.
As to flavor, it was certainly on the sweeter side with honey and vanilla taking center stage. I did get an interesting tea note that went really well with the vanilla and honey. It also had a brighter note, like crisp, sweet apple (and not that overripe apple note that I get so often in young bourbons).  Carrying through on that "sweet" theme, I also got a candy corn note, as well as some of the baked peaches I got on the nose. The finish tempered the sweetness a bit. I still got a light maple syrup note, but it was balanced out by a sort of pie crust note that made the finish very enjoyable.
Overall, while I did enjoy it, it leaned a bit more on the sweeter side than I generally prefer.
Grade: B

Maker's Mark 46 Cask Strength Kentucky Straight Bourbon
- 111.2 Proof
I've picked up a few 46 Cask Strength bottles here and there. There once was a time that it was a limited release only available at the distillery, but eventually Maker's Mark realized there was real money to be made off the stuff, and now I'm seeing it fairly regularly on the shelves, which is a good thing!  The nose on this one was a stark contrast to the regular cask strength. I immediately noticed a sort of damp or musty wood note. I know it sounds weird, but it wasn't off-putting, and it seemed to work really well with the other notes I got on the nose, including a rich fig or raisin note, and even a bacon note. It had just the slightest bit of sweetness.
The flavor didn't quite follow the nose. It certainly had the sweeter, rich notes of fig and raisin. But, along with that I got a significant pecan pie note. It was buttery and full of brown sugar, but also had a certain nutty quality to balance it out a bit. On the finish I got a rich dark cherry note and the nutty note seemed to lean more towards an oak note. Both flavors on the finish added some bitterness that balanced out the sweetness I was getting in the pecan pie flavors. It also had a bit more bite on the finish, with a spicy cinnamon note that lingered for quite a bit.
I enjoyed this one more than the regular cask strength but not by a lot. It did add the spice component as well as a bit more complexity that I would have desired in the regular cask strength.
Grade: B+

Maker's Mark Private Select Rob Samuels Personal Selection Kentucky Straight Bourbon
- 110.2 Proof
- 2 Seared French Cuvee; 4 Roasted French Mocha; 4 Toasted French Spice
This was the one I was most excited about, primarily because every Maker's Mark private selection I've had has been its own unique experience, and I was very curious what experience a personal selection from Rob Samuels himself might provide.  This one gave off aromas of black pepper and oak. The oak at times leaned more towards a walnut flavor. It also had a light smokiness, kind of like a burnt sugar note, as well as a sweet, creamy nougat note.
Interestingly, the first note that I made while tasting this one was that it tasted like an older bourbon. It seemed to have significantly more oak influence, with some tannic bitterness coming through. I particularly enjoy a little bit of tannins, so long as it's not overdone (it's what I love about Elijah Craig 18 year), and here it was done very well. Rather than detract from the bourbon, it added to its complexity and character, complementing the sweet toffee and brown sugar notes. This one was a bit on the earthier side as well, with nutmeg and even a bit of leather. It had a healthy amount of cinnamon spice as well, which, along with that toffee note, lingered for quite a while on the finish.
Of the three, this was certainly the one I enjoyed the most. But, that said, given the profile, I'd imagine plenty of others had one of the other two pegged as their favorite. This one, however, had complexity and even a touch of funk that I loved.
Grade: A-
Posted by Brian Zeeck at 4:00 PM