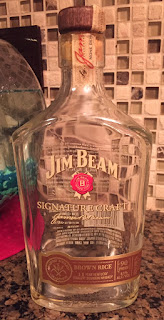 As with the Soft Red Wheat bourbon that I posted about earlier, this was another bottle that I was more than happy to grab at the nice price of $19.99, significantly discounted from the usual $49.99 price tag that had kept me from buying a bottle up until this point. At $20, even though this is only a 375 ml bottle, I was willing to give it a shot.

The first thing I noticed is that the nose was not noteworthy. It quite frankly reminded me of a mid-shelf mixer, having those hints of vanilla and brown sugar, but you really had to work to notice them. So far nothing special here.

Upon tasting it, I remained unimpressed. The flavor up front was very mild and watered down. There was absolutely no burn, but that usually goes hand in hand with the watered down flavor. So far I was pretty disappointed.

But then, probably a full two seconds after it hit my tongue, flavors started to come through. I'm not sure what they were waiting for, perhaps setting the bar low to make their appearance. But they eventually did show up to the party, and suddenly this watered down, plain bourbon took on a life of its own and was very enjoyable.

That sweetness reminded me of cornbread with honey butter. I know that's kind of specific and for some, perhaps, unrelatable. But, it's just one of those things where you taste a bourbon and you're reminded of something you've had before, and for me this was it. It wasn't a dessert-type of sweet, just a mild, flavorful sweetness that makes a good compliment to spicy Cajun food, for example. Those sweet tones were balanced by a mild wood and toasted grain flavor that really added to the complexity of the flavor, tardy as it may have been.

This one was weird. The nose is really weak, and even with my last pour, it really came across as bland and watered down for the first second or two, and then the flavor hits, like a delayed reaction. I'm glad it finally did show up, though, because I then found myself enjoying it when it was there.

While I think I liked the Soft Red Wheat better, it's not by much, and this one ultimately gets the same grade. For the sale price, it's worth the purchase, but I'm glad I stayed away from paying full price.