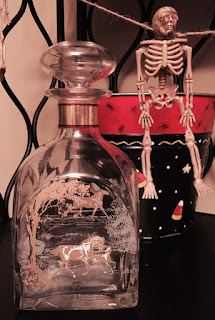 Rock Hill Farms was one of those bourbons that I figured just was not distributed in Illinois for some reason. In fact, right or wrong, I think I had read on a forum somewhere that it was only available in Kentucky and Indiana. So, when I made my trip to Kentucky, I made it a point to hunt down a pour and finally try it, having heard nothing but good things.

On my last night there, at the very last bar we stumbled to, I finally ordered my pour of Rock Hill Farms. I was a bit disappointed, though. Not disappointed in the bourbon. In fact, from what I recall, I really enjoyed it. Rather, I was disappointed that I didn't get to try it until I was already a number of drinks in and didn't really get to "taste" it.

As luck would have it, one day I was putting gas in my car and I noticed a decent sized liquor store in a strip mall behind the gas station. On a whim I went in to check out their selection. Although the selection overall wasn't impressive, they had at least 10 bottles of Rock Hill Farms (as well as a bunch of bottles of Elmer T. Lee on hand, another one that has become elusive). So, naturally, I grabbed one immediately.

The nose was a traditional bourbon nose, heavy on the vanilla with toffee to balance it out. Nothing particularly stood out other than that it seemed like the typical nose of a good bourbon from Buffalo Trace, a distillery that seems to produce a number of my go-to bourbons.

However, on the first sip, I felt like I possibly found my ultimate go-to bourbon, if it weren't for the fact that it is hard to find. This bourbon embodies everything I love about bourbon and what got me into bourbon in the first place. It really brings the caramel and toffee to the forefront, like a dessert whiskey.

However, it strikes that nice balance of being sweet and delicate, while at the same time being bold and avoiding being too sweet. At 100 proof, it is rich and complex, yet it is incredibly smooth.

Additionally, you can tell it has spent a decent amount of time in the barrel (perhaps just the right amount of time), as it picked up some nice complementary oak notes, but not enough to dry it out or make it seem too woody.

The next time someone asks me what my favorite bourbon is, Rock Hill Farms may be the first answer I give them. While it's not ultra-rare or a limited release, and while, hopefully, I may have found a source for it that will keep it from being scarce, it is everything that makes traditional Kentucky Straight Bourbon so damn good. In fact, I will likely be stocking up on another bottle or two in the very near future.