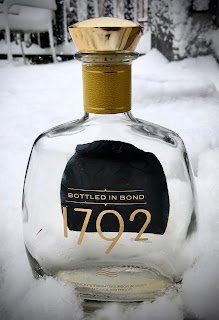 Barton's 1792 Small Batch has never really done a whole lot for me. It's always just kind of been there, certainly a good bourbon, but with nothing to hate or love. That being said, however, I have really liked nearly every one of their other releases, from the port finish, which was fantastic, to the sweet wheat to the high rye.

When they released the bottled in bond version, I was curious, but not go-out-of-my-way-to-get-a-bottle curious. After all, it seemed to me it would just be regular small batch, just meeting the requirements of the Bottled in Bond Act. However, one of my whiskey dealers informed me that he was able to try a sample at a recent event he attended and that it was outstanding! Though skeptical, my curiosity level certainly went up significantly and I made sure to grab a bottle the next time I found one. I didn't get around to opening it immediately, and when I did, I immediately questioned that decision to wait.

The nose was interesting on this one. The very first thought that came to mind when I sniffed my glass was creamed corn, something that was a staple in my household growing up. Other notes came through as well, however, including notes of wood with cinnamon, as well as a sweeter molasses note. I also got a sort of cooked peach smell too.

The flavor on this, even though it didn't necessarily match the nose, was delicious! The first thing I noticed was an oatmeal cookie note, that sweeter, sugary type of cookie but with that oatmeal undertone. In this sense, it was certainly different, but as someone who loves oatmeal cookies (without raisins, of course) I thought it was great.

In addition to that cookie note, there were a lot of other flavors that all really seemed to play off one another. It had a light note of molasses, which made it lean at times toward a gingerbread type flavor. It also had a light pepper spice that was almost fleeting at times, just around enough to be noticed, but never really stuck around.

The baked peach that I got on the nose seemed to make its way through from time to time as well. I also got an interesting mix of orange peel and cola notes, which flavors really worked well together. I noted that on later pours I got a kind of a pear flavor as well, and all of these flavors were kind of placed on top of a caramel note that was present throughout.

This bourbon had a lot of different flavors, a combination which I don't think I've really ever noticed in other bourbons. Between oatmeal cookie, orange, cola, pear, and molasses, it really had a lot going on. But, here it all worked really well together, making it not only interesting and unique, but really tasty as well. I'm not sure why it's so much different than the regular 1792, but it is, and even though I waited a while to get around to opening this bottle, I had it finished off in a matter of days, because I just kept going back to it.\