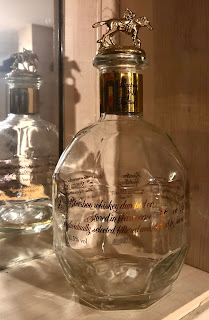 A while back I managed to get my hands on a Blanton's Gold and a Blanton's Straight from the Barrel. My guess is the guy I bought them off of simply made the trip to Canada to get a few of eacch and then made a few bucks off them. I was happy to pay what I did (certainly more than the $60 suggested retail price), figuring I had no other real way of getting my hands on such bottles.

After also acquiring two different store picks of the regular Blanton's, I then had my eyes set on setting up a Blanton's tasting for my whiskey club. I searched and ultimately landed a Black and a Red, both Japanese imports only, and I finally had my 6-bottle Blanton's tasting!  Everyone in the group was pumped to try this tasting, and one of the guys even brought an additional bottle of Straight from the Barrel.

Quick spoiler -- to the extent the tasting was a competition, the Gold was the winner. It wasn't everyone's favorite (some liked the Red), but it definitely had the most votes.  And there was plenty of reason for it. The nose on this one was soft and sweet. It was full of caramel with a light spice to it that was kind of a blend between cinnamon and black pepper. I also got a healthy dose of brown sugar as well as what I swore at times was the distinct note of chocolate-orange.

It smelled delicious and it had a palate to match. This was what some might describe as a toffee bomb.  It was full of those butter and molasses notes that made this just taste like candy. In addition, to go with the sweet and buttery flavors, this had a nice, oily texture to it that coated the mouth in flavors of brown sugar and butter. At 103 proof, it had some added kick that you don't get out of the standard Blanton's, and it worked so well with everything else.

On the back end I got a little bit of that heat, paired perfectly with a light cinnamon spice to tickle the back of my throat. It also had a nice, long finish which, along with that light cinnamon spice, had some rich notes of vanilla bean that seemed to stick around forever.

As I made my way through the last pours, there was a sort of yeasty quality, which turned into this dessert-like pastry, almost like a caramel coffee cake with vanilla icing on top. Those last few sips were some of the best tastes of whiskey I can recall in quite some time.  If only this were a regular offering, or, at the very least, actually able to be purchased here in the states.