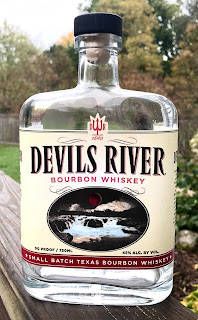 My father-in-law has been getting more and more into whiskey lately, and, accordingly, he has been branching out on the whiskey he's been trying. One evening he was telling me about this rye that he sampled at a little store near him, and he liked it so he bought a bottle. As he was telling me the story, though, he couldn't think of the name of the brand. That same evening, he was out running errands, and when he stopped by my house, he literally dropped a bag with two bottles of booze right into my lap as I sat in my recliner.

Curious as to what this brand was he was telling me about, I opened the bag to find two bottles of Devils River whiskey, a rye and a bourbon. I had never heard of Devils River before this, and despite my generally negative experiences with Texas whiskeys, I was still somewhat intrigued. And, in inspecting the label, I couldn't hep but smile when I read the words "Sin Responsibly" right below the Surgeon General's warning.

That intrigue, unfortunately, waned pretty quickly. The nose was harsh. I got primarily young corn and ethanol. These were really sharp notes that seemed to sting the senses. It also had that overripe apple note that I always get with young bourbons. I don't know the age of this whiskey, but it couldn't have been much over two years.

The palate was a little bit more forgiving than the nose. I was surprised at how smooth it was, having expected to get harsh notes and burning sensations based on what I was getting on the nose.

Of course it had lots of corn notes, like canned corn. It had a certain amount of bitterness, almost a tannic quality. Yet it didn't have the wood notes that seem to go with it. It seems weird to have one without the other, but it had that astringent quality to it.

It also had a black pepper quality at the end which, if this bourbon had the traditional sweet and rich caramel, toffee and vanilla notes, would have worked really well. Without those notes, however, it just came across as hot without the flavor.

I wish I had more to say about this bourbon, but it was just hard to drink. It needs significantly more time in the barrel. It's young and undeveloped, and the flavors that are there are a bit rough.  My father-in-law agreed. He found it unpalatable, and yet he still speaks fondly of the rye.  I'll have to give that one a try soon, as young ryes seem to hold up better than young bourbons do.