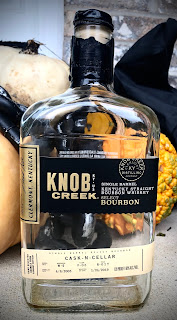 A couple months ago I was traveling to Indiana, and of course as I made my way I kept an eye out for any liquor stores that might provide a nice little side trip during my travels.  On this particular day, I found myself wandering into a store called Cask-N-Cellar in Schererville, Indiana.  I've never heard of the store, but it's apparently a decent sized chain in Northwest Indiana, and one that I wish I had known about.

The store itself was pretty good sized, but what caught my attention immediately was the display to my left as I walked in -- store pick after store pick, with everything from Knob Creek to Journeyman to Four Roses to 1792. There were at least 12 different selections on display, and I was immediately impressed.  And of course I knew that one of these would have to come home with me. After hemming and hawing over which one to grab, I finally noticed a single Knob Creek Bourbon among a stack of ryes, and when I looked at the age, almost 14 years, the decision was easy!

The nose was heavy with molasses, almost giving off a gingerbread note. It also had some rich vanilla notes to balance it out. It was substantially more complex than that, however, with red wine notes that imparted flavors of raisin and plum. It even had some oak and chocolate on the nose, along with a decent amount of spice, like a Mexican chocolate. There was a lot going on just in the way this smelled.

When I took my first sip I was immediately hit by a rush of brown sugar and sweet caramel. It immediately reminded me of candy. It wasn't cloyingly sweet, though. It just had those flavors. There was also an anise note that came forward pretty quickly, but it was relatively mild, just the way I like it.

I also got the Mexican chocolate notes that I was getting on the nose. It was kind of a rich, dark chocolate and cinnamon note that provided some tempered sweetness up front and some spicy cinnamon on the back end.

Layered underneath all these notes were almond and even walnut notes. There was also a decent amount of wood on the palate. These notes, along with the caramel and chocolate seemed to all combine to a sort of dark chocolate and pecan pie combination, and it was delicious, especially when countered by the spicy cinnamon on the back end.  It was like the dessert I never knew I wanted!

Knob Creek picks are always an easy decision given the price. This one was one of the better ones I've had in quite some time, and I'm very impressed with the palate of whoever at Cask-N-Cellar picked this barrel. I can't wait to get back to try some of their other selections to see just how much or palates align in other products.