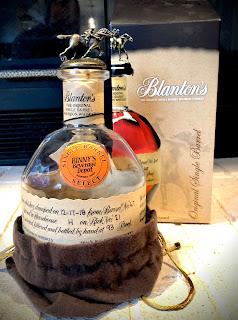 I bought this bottle just about a year ago, at a time when hype over Blanton's store picks was incredibly high (perhaps it still is, but since the demise of the Facebook secondary market, I really don't have my fingers on the pulse of such things).  I held onto it for quite a while until I put together a lineup of six different iterations of Blanton's.

Compared to its cousins, which included two Straight From the Barrels, a gold, a red, a black and another store pick, this one was easily one of the favorites. The only one that got as many top votes was the Blanton's Gold. It was unanimous, however, that Binny's had picked a great barrel with this one.

The nose on this had the traditional Batch #2 notes, with heavy doses of toffee and caramel leading the way. It also had a nice cinnamon flavor, and even a bit of black pepper. On top of that, though, what stood out with this one was a very familiar smell of cherry pie. I got notes not only of cherry, but also the warm, bready crust and a light, sugary sweetness.

As to the flavor, I feel like I could almost just say, "See notes above." The flavor really matched the nose, with caramel and brown sugar leading the way. It was rich and sweet up front, followed by a nice, light cinnamon finish.

It also had a nice vanilla undercurrent that at times had me thinking of candy corn, but not quite as sugary. That sweet vanilla was balanced out by the light peppery note on the back end.

But best of all, that cherry pie note from the nose was also present in the flavor, and it was delicious! Those baked cherry notes and pie crust flavors worked incredibly well with everything else that was going on in this whiskey, and it really made this an enjoyable dessert whiskey without getting too sweet.

While I really enjoyed the Blanton's tasting and will likely never do something quite like that again, I feel like I should have opened this one much sooner. This was a fantastic bourbon, and it was different from most other Blanton's I've had but in a delicious way! While I wished I had opened it sooner, I'm now sorry that it's gone.