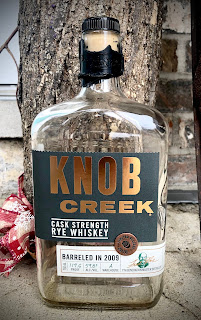 I've always been such a big fan of the Knob Creek private selections, both the bourbons and the ryes. It's a great way to get a nearly barrel strength bourbon or rye, at a good age, and at a relatively low price. More importantly, they always deliver in quality.

As a bit of a rye-head, the idea of a cask strength rye release, even if only a bit higher proof than their 120 proof, had their desired effect of causing me to crack open my wallet. However, for the longest time I couldn't find this bottle anywhere. I kept seeing it all over social media and elsewhere on the internet, and the reviews were all positive, making me want it even more. But it just wasn't there . . . until I wasn't really looking for it. Months later I happened to spy a bottle sitting in the corner on a shelf of a store's higher end whiskey cabinet, and I snatched it up, even despite the somewhat hefty price tag.

The nose was interesting. I got a lot of both orange and pine. Even writing it down now I'm thinking of Pine Sol. But, to be clear, that is not at all what I was getting on the nose here. Rather, it was fresh, real orange (not that fake cleaner smell), and the pine had a more earthy note, and served to complement the fresh citrus note. Accompanying the pine note was a bit of a woody smell, and this was all sweetened up a bit by a nice brown sugar note.

The first thing I noticed when I took a sip was the great oily or buttery texture this rye had. It was one of the more viscous whiskeys I've had in a while, completely coating every inch of my mouth and tongue in flavor.

That flavor included a light note of that same pine that I got on the nose. That was accompanied by a sweet undercurrent, like a caramel and brown sugar note throughout each sip. The cinnamon seemed to then be layered on top of all of this, like a beautiful, sweet and spicy rye cake.

To complete this birthday party, I also got a bunch of vanilla from front to back. Towards the end of the bottle, a spearmint note came through, and mixed with the healthy vanilla flavors, had me thinking of mint ice cream (without the chocolate chips) but with a kick. It was at this point that I decided, "Holy crap this is good!"

Ont the finish I got a nice, spicy tickle in the back of my throat. It was almost like a sweet but spicy cinnamon, with a light touch of cayenne to give it that nice, spicy burn. It was just enough to make me want to go right back for that next sip.