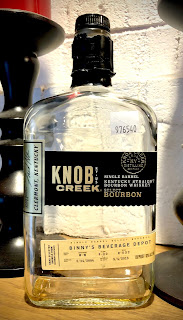 I feel like every time I write a review on a Knob Creek store pick, I start it off by stating just what a great value these store picks are. And here I am doing it again. The fact that recently there seems to have been a flood of 13+ year old Knob Creeks hitting the market, at nearly full proof, and for only $40, has had me grabbing these left and right lately.  As I've said before, every Knob Creek pick I've had has been, at bottom, very good, and some of them have been absolutely great! That makes grabbing a 14 1/2 year old, almost full proof bourbon at $40 a no-brainer!

The nose on this was rich and bold, with anise and cherry mixing together, almost like an aperitif you'd get at a nice Italian restaurant. It also had a nice, spicy cinnamon note. The nose did have a bit of burn (to be expected given the proof), as well as a distinct wood note that carried a bit of bitterness with it.  That seemed to fade over time, however, and on later pours I noticed a bit of an apple pie note, with baked apples and baking spices coming through.

Upon taking my first sip, one of the first things I noticed was how easy it was to drink. Despite the high proof and the amount of alcohol I got on the nose, there was almost no alcohol in the flavor. It also had a nice, oily texture which might have helped with that and certainly carried the flavors to a nice, long and lingering finish.

It was very vanilla forward, like an unsweetened natural vanilla flavor. That mixed well with a healthy amount of dark chocolate, making this a very rich and decadent whiskey. I even got some peanut notes which only added to the richness.

On later pours, the vanilla seemed to dominate even more, but it also seemed to sweeten up a bit. I even got a light note of spearmint, kind of like what I get in some ryes. It worked really well with the heavy vanilla flavor.

This is one bottle that seemed to change a lot over time, because in later pours I got a distinct note of root beer. It's as though that heavy vanilla finally married with the other spices, the cinnamon and anise, to the final flavor that had me thinking of root beer. It was followed by a light note of black pepper spice, seemingly rounding it out.

While I nabbed this bottle because of its age (as well as the fact that I have a hard time passing up Knob Creek picks), ultimately, regardless of the age, this was a delicious bourbon. Once opened, I found myself repeatedly going back to the well on this one, and it was over with before I knew it.