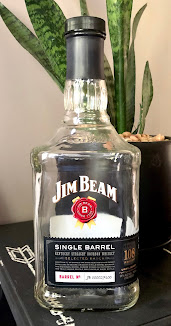 I do love it when the big distillers come out with a new line. Whether it's Four Roses releasing Small Batch Select, or Old Forester releasing a rye, or Heaven Hill releasing an Elijah Craig Rye, or Wild Turkey releasing a Rare Breed Rye (I'm seeing a trend here), it's always nice to see what will be a mainstay hit the shelves. I think this is so for two reasons.  First, what if it's really good?  How great is it to have really good whiskey available all the time!?! Second, the price is usually pretty decent as well.
So, without any advance notice (at least none that I saw anyway), Jim Beam released a single barrel, 108 proof whiskey. I've heard its whiskey aged 5-7 years (though I've confirmed nothing), and at 108 proof, it's going to pack a decent punch. It was a no-brainer to grab one off the shelf at $30 and give it a try. I was really hoping to find another regular for the rotation, but ultimately, that's probably not going to be the case.
The first thing I got on the nose was peanuts.  Not only that nutty flavor, but also a light saltiness to go with. I also got some sweet, candy-like notes of toffee and caramel. It also had some notes that had a little bite to them, like a dark cherry note as well as the smell of unsweetened tea.  There was even a light chocolate note to it. All in all, I really enjoyed everything together, even it it did seem a bit all over the place.
The palate was somewhat different, though. The primary flavor I got, both in earlier pours and the later pours, was a cherry cola flavor. It had that cherry note and even tartness, as well as a good level of sweetness in the caramel/cola flavor.
It also had some wood notes to it that carried a bit of a tannic quality, which I found surprising given what I was told the range of the ages of the barrels. It was certainly more woody than expected. To balance that out, though, there was not only the sweet cola flavor, but also a nice, soft butterscotch note, which to me was the best part of this whiskey.
There was certainly a nutty quality to it, kind of like a black walnut but with a touch of sweet cashew. It was the best of both nut-worlds. At 108 proof, while I would have expected some heat on the finish, this seemed to have all heat on the finish, and that heat seemed to really mute any other flavors on the finish. The nuttiness did stick around for a little bit, but any of the flavors that I would have wanted to linger on the finish seemed to disappear.
Overall, this was a good-but-not great whiskey. I likely won't be reaching for it on the shelves again, primarily because there are better options at the price, there are so many new whiskeys coming out to try, and, quite frankly, there are so many other whiskeys I just haven't tried yet. My rotation of regulars is pretty small, and this one just isn't making the team.
Grade: B-
Posted by Brian Zeeck at 5:00 PM