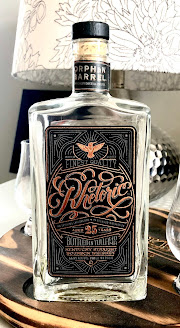 VITALS:
- $130
- 91 Proof
- 25 Years
- Kentucky
A while back my wife had the nerve to make a wine run and, while there, pick up two really nice bottles of whiskey for me. I can't remember what the occasion was, whether it was that I had a really good day at work or perhaps I had had a really bad day at work. I just can't recall. Quite frankly, I can't recall as I sit here typing this what the other bottle was. But I do recall her bringing this one home for me.
It's not that hard to recall. After all, having had mixed experiences with Orphan Barrel products, the odds of me dropping $140 on another bottle were pretty slim, even if it were for a 25 year old bourbon. Based on my prior experiences with Old Blowhard, Barterhouse and Lost Prophet, all Orphan Barrel Bourbons at least 20 years of age or older, I figured this would be just as woody flavored as those bottles were. But, I was nonetheless thrilled to get one as a gift (even if it was still my money that bought the bottle)!  It's the gesture that counts, and she did a great job of picking up something I hadn't already had.
Despite my concerns, the nose was not nearly as expected. It packed a decent cinnamon punch, and yes, it was more like cinnamon sticks, but it didn't come across as woody, just Christmas-y.  I also got an earthy type of nougat flavor, like not so sugary sweet but almost leathery. There were also some caramelized or burnt sugar notes, and, despite all this, there seemed to be a sweet honey note in the background to brighten it up a bit.
On the tongue it was thinner than I expected. I get that this is a lower proof bourbon, but the older stuff frequently carries a bit more texture than this one did.  Nonetheless, it did still pack a lot of flavor, which I'm sure was due to the amount of time spent in the barrel.
The prominent flavor is what I would describe as dark cherry and walnut (like drinking well-made furniture).  It didn't come across as over-oaked, at least not with respect to the tannic qualities I often get from more wood-forward bourbons. The wood was there, though, and it certainly made for a dryer bourbon, removing much of the sweetness from the cherry.
I also had a layer of cinnamon throughout, which at times seemed to be accompanied by chocolate and cherry notes. The chocolate was the most welcome flavor here, but it primarily lingered in the background. Rather, it was that walnut note that seemed to dominate each pour, with that kind of woody-nutty flavor and a touch of bitterness to go with.
What I really didn't like about this bourbon, though, is that I got this odd, tongue-numbing sensation.  But not like the kind that I would have gotten when I was 21 years old and not used to brown spirits. Rather, and this is going to be completely unrelatable to just about anyone that reads this, it was like the sensation of when you eat barbecue that has too much liquid smoke in it. Obviously this is coming from my own personal experience, but it's a sensation I've only had a couple times, and that's what it brought me back to.  It was really weird and quite off-putting.
Looking past that weird liquid smoke experience, this is a woody, well-aged bourbon that gives you many of the flavors you'd expect from such. Sometimes I find myself in the mood for that flavor profile, and this certainly fit the bill. But the weird liquid smoke experience was, ultimately, pretty hard to get past.
Grade: B-
Posted by Brian Zeeck at 5:00 PM