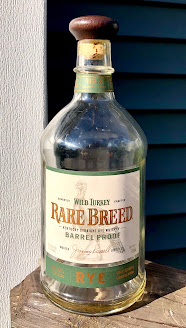 VITALS:
- $60
- 112.2 Proof
- NAS
- Kentucky
It's been a while since I've been really excited for a new release, but when Wild Turkey announced the release of Rare Breed as a new regular in its line-up, I was practically giddy.  I've made no effort to hide my love for Wild Turkey ryes, and a barrel proof Turkey Rye under the Rare Breed label would have been on my wishlist of whiskeys I want to see produced.
When it got near the anticipated release date, and when I started seeing people in other parts of the country start posting pictures, that's when I began hounding my local liquor store manager. I'm sure I couldn't have been more annoying, but each time I went in I simply asked, "Did the Rare Breed come in?"  "Not yet" was all I was ever told . . . until I wasn't.  When I finally got a bottle in my hands it was all I could do to wait until I got home to crack it open. I only hoped it would live up to all the hype I had built up in my head.
On the nose I got that familiar cinnamon spice. However, there were also softer notes as well. I also got a sort of buttered toast note, which reminded me of cinnamon sugar toast (a very underrated snack, by the way).  I also got a root beer note that I really liked. The vanilla undertones gave it hints of a root beer float.
While the vanilla wasn't strong on the nose, it was very present in the flavor. This was one of the more vanilla forward ryes I've had in a long time. The cinnamon spice was also present, and it seemed to hit from front to back. It hit the tip of my tongue immediately with each sip, and it seemed to linger on the long finish.
That cinnamon paired with a honey and graham cracker note to provide a sweet, crackery flavor. There was also a healthy dose of caramel to add to the sweetness and give it a little bit more richness in flavor. This was certainly a sweeter rye, but it never got anywhere near being too sweet. As far as sweeter ryes go, this was right in my wheelhouse.
The vanilla that lingered throughout also stuck around for a long time on the finish, and on later pours seemed to pair with a sweet spearmint note that I couldn't get enough of. It added a light crispness to the whiskey that seemed to round it out.
Overall, I thought Wild Turkey hit this one out of the park. This rye is full of rich and complex flavors but is completely balanced. The high proof is almost not noticeable, and it provides the right balance of sweet and spicy. What's great is that it's not some super rare limited release, and we should be seeing this on shelves semi-regularly.  This is my whiskey of the year so far for 2020, and I need to go get more . . . like now!
Grade: A
Posted by Brian Zeeck at 4:00 PM