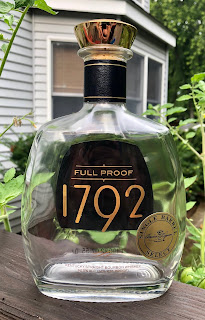 I recently took a trip to Lake Geneva, Wisconsin with my wife, just an evening with just the two of us. Beforehand, however, I just happened to see some Facebook recommendations for good bourbon stores and restaurants in Lake Geneva, and one of the recommendations was Bruno's Liquors.

So, romance be damned, I made it a point to get over to Bruno's to see what they had to offer. For the most part, their whiskey selection was pretty decent, though it was a lot of stuff that I can find on the shelves by me. However, right up front they showcased two store picks they had recently gotten in--a Buffalo Trace single barrel and this one. Of course I grabbed them both, much to the chagrin of my wife.

I've been a big fan of pretty much every bottle of 1792 Full Proof I've picked up to date, so I cracked into this one first. Upon opening the bottle, I was immediately hit with strong scents of brown sugar and orange peel. It almost had an Old Fashioned smell to it. It also had a nice cinnamon spice on the nose that tickled just a bit, and some wood tones carried through as well. This was all seemingly layered over a subtle but ever-present caramel note.

The flavor was a bit different from the nose. Rather than getting that brown sugar and orange peel up front, the cinnamon was probably the most forward flavor, along with a distinct chocolate flavor. I've encountered this combination before, and while I do love finding both flavors in my whiskeys, together they tend to make a bit of an odd combination.

However, there was a lot more going on with this as well. I got a distinct candied cherry note, not the cough syrup kind of flavor, but also not the fresh cherry flavor. Perhaps more along the lines of a maraschino cherry flavor.

There was a bit of an oak flavor which, along with the heat from the high ABV, added a touch of harshness to this bourbon. I found that it had this sort of weird tongue-numbing quality, something that I've found before in foods where too much liquid smoke was used. I realize that's probably not very relatable to anyone reading this, but that's where my mind when as I was tasting this.

There was also this anise or licorice flavor to it, which, along with the wood notes, left a bit of an odd flavor behind after each sip. The orange peel bitterness seemed to linger for a bit, and between all that and that weird numbing quality, I had a hard time enjoying the finish.

And yet, on the last few pours, the sweet brown sugar and pleasant cinnamon spice was all I really noticed, with the bitterness and weird numbing thing having gone by the wayside.  I really wish the rest of the bottle were like those last two or three pours, because I found them to be asbolutely delicious.  This was a bit of a schizophrenic bottle, so I'm finding it hard to attribute a grade to it, because different pours could have been anything from a C- to an A, so I've got to park this one somewhere right in the middle.  Now to open that Buffalo Trace!