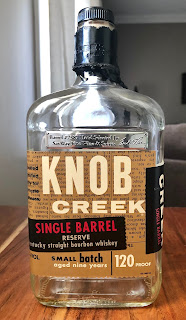 Sav-Way is a small little liquor store near me that has three different locations. They usually have a pretty decent whiskey selection, and I make it a point to pop in from time to time to see what's new. I've been able to find some decent bottles at their shops from time to time at decent prices, although they do have a tenancy to significantly mark up their more allocated stuff.

One day while perusing their shelves looking for something to drink for the night, I settled on a private selection of Knob Creek they had. I feel like I've been drinking a lot of these lately (not necessarily a bad thing), and this particular one didn't have any information, such as age, entry proof, warehouse, etc.  Unfortunately, the person working there that night didn't have that information either. Nonetheless, given my overwhelmingly positive experiences with Knob Creek private selections, I decided to give this one a spin.

On the nose I immediately noticed the alcohol. It was really hard to escape, and it was considerably more noticeable than I recall from other Knob Creek private selections. Certainly after being open a bit that alcohol burn died down some, but it remained stronger than any others I've had.

That being said, behind the alcohol I got the more traditional notes of rich caramel and toffee. I also got a decent amount of oak on the nose, and I could even detect the tannins. Finally, there was a healthy dose of cinnamon, and that note seemed to get heavier with each sniff.  All in all, while it may seem otherwise as I describe it, I actually really enjoyed this nose. It all worked well to create a rich, complex and spicy aroma.

However, with each pour I kept getting this flavor that I just couldn't put my finger on. It was kind of earthy, kind of spicy and kind of vegetal  About half way through I had my a-ha moment, and was able to identify that odd flavor as pumpkin spice. I can't say that I've ever had such a note in any of my previous reviews, and perhaps that's why I had such a hard time placing it.

The wood and spice were balanced out by a sweet brown sugar that was present from front to back.  On the finish I got a light cooling mint note as well, something I find far more often in ryes. Though it was light, it was definitely there and it seemed to stick around for a while.

Overall, this was a very good bourbon (further cementing my belief that Knob Creek picks are always worth the gamble).  It's not the best thing that I've ever put in my mouth, but it was rich complex and interesting, and I really enjoyed each pour.