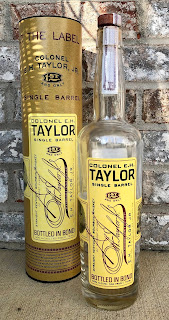 This is one of those use-to-be-on-the-shelf-all-the-time bottles. Yet, in the past year or so, it seems to have nearly disappeared (a not uncommon experience when it comes to Buffalo Trace products).  It was always one of those bottles that I eventually wanted to try, but, figuring it'd always be there, was never a priority. After having not seen in on the shelves in quite some time, though, I took the opportunity to buy one when it came, even over some more desirable Buffalo Trace products that were available that day.

So far, I've only had the rye and the barrel proof from the E.H. Taylor line up, and while I've enjoyed what I've had, I've never fawned over these bottles like I see so many others do. But, I went into this one with an open mind.

The nose on this one was fantastic. It had a nice buttery cinnamon and caramel smell to it, like some rich and delicious dessert. I also got some almond as well as some beer-y yeast and even a bit of a nutty note as well.  All in all it gave of this sweet and familiar caramel apple note, with the apple note adding a bit of crispness to the nose.  Overall it was incredibly inviting.

The first thing that I noticed about this whiskey is that it was very smooth (yes, I know . . . but in this context I mean that despite being at 100 proof, the alcohol burn seemed nonexistent) and easy to drink. Perhaps dangerously so.

As for flavor, I got a decent amount of amaretto and caramel, along with some light vanilla.  It was full of these rich, bakery-esque flavors. It even had that bready quality, kind of a yeast note similar to what I got on the nose.

This was all offset by a spiciness that was kind of a blend of cinnamon and white pepper. It had the sweeter and woody spice of the cinnamon, along with the bight of the white pepper that seemed to stick in the back of my throat for a bit.  The finish seemed relatively short, but that spicy tickle really lingered.

I also got a decent amount of wood notes on this bourbon, more than I expected really. It added a bit of dryness to a bourbon that was otherwise on the sweeter end.

All in all, I would like this as a standard go-to pour. But, for the price, it just can't be that.  I really wanted more out of this bottle, but it really was more good than great, and it didn't do much at all to separate itself from the crowd.